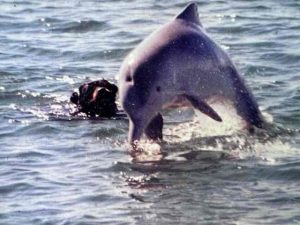 In the early 1970s a wild Australian Humpback dolphin used to regularly visit the area outside the Tin Can Bay coast guard and reportedly play with a Rottweiler who would patiently wait for the dolphin to arrive.

It seems probable that originally the dolphin followed one or more of the many prawn trawlers that operated out of Tin Can Bay at the time, consuming by-catch thrown overboard on return. Over time other dolphins followed in and through breeding numbers increased.

It should be noted that dogs are rightfully not permitted in the Barnacles dolphin feeding area, and there was some controversy at the time of the Rottweiler and dolphin interaction as to whether it was a ‘good thing’.

But it is interesting to know how some dogs interact with wild dolphins. A dog with a keen ear can hear the dolphins’ high-pitched squeaks, squeals, chirps, and whistles that elude the human ear.

The dog-dolphin interaction has been proven at the Akaroa Dolphins Tourist Centre at Akaroa Harbour in New Zealand. They have a dolphin-spotting dog on each of their boats and tourists not only enjoy seeing the Hector’s dolphins (the world’s smallest and rarest oceanic dolphin), but also the interaction between the spotter-dog and the dolphins.

With the spotting dogs involvement, Akaroa Dolphins has a 98 percent dolphin spotting rate on its several tourist boats. 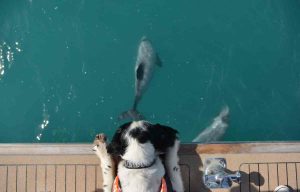 One of their dogs, Buster, a miniature schnauzer, has been a spotter-dog since the age of one. When within range of the dolphins he becomes very animated, darting back and forth across and along the deck. His excitement has propelled him accidentally overboard on a couple of occasions so his life vest is a necessity.

“Our dogs don’t get in the water but all become animated when the dolphins are near,” said Julia Waghorn of Akaroa Dolphins. “The photos of the Rottweiler (in Tin Can Bay) are incredible!”

Any Tin Can Bay ‘old timers’ have any more info to add to this interesting interaction between species? Feel free to get in touch!