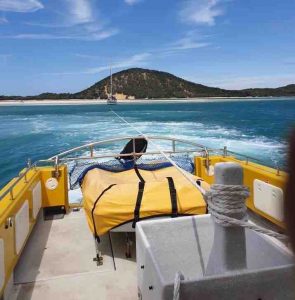 by Coast Guard Tin Can Bay

Sadly, in Australia we have had a spate of deaths and lucky escapes from people falling overboard from boats in the last few months.

The latest episode involved a man on his big vessel off Caloundra who was knocked off the vessel while trying to secure his dinghy. Fortunately, he was able to swim to a large shipping channel marker and was rescued and survived.

Others have mostly resulted in death, including two cases in Western Australia just last month.

In all recent cases, those who fell off their boats were not wearing a life jacket, even while boating alone.

Although the water is relatively warm at the moment, hypothermia is still possible after about 12 to 20 hours in the sea, but far less in winter.

None of these people had expected to find themselves unexpectedly in the sea. If boating alone offshore, wearing a lifejacket at all times is a smart thing to do.

Modern inflatable jackets take up very little space and do not interfere with any physical activity. They do need to be serviced, but for private use, this can be done by the owner.

Your author learned the hard way a few years ago after falling from a racing yacht during a wild storm.

Luckily a radio call was made by several vessels and I was recovered after about 45 minutes in large sea swells that made it hard to be seen by the rescuers. I was already nearing exhaustion.

A wise old skipper said to me when I joined Coast Guard, “if they could see what we see, they wouldn’t do what they do”.

Of all the ways there are to die, I can’t imagine drowning would be the most pleasant.

Next month, we are hoping to have news about changes to Marine Rescue services in Queensland as a result of the Blue Water Review in 2019.

The project was shelved after the bushfires in early 2020 closely followed by the battle to contain COVID-19.

Since the recent state election, evidence is mounting that the potential merger of Coast Guard and VMR is getting back on track.

In the meantime, we keep training, and as always, we are here to assist you when you are in trouble on the water.