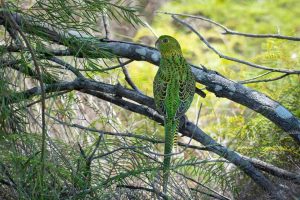 If you have noticed people walking around Rainbow Beach over the past month with very large cameras, be assured they are looking at feathered birds and they are very excited.

Paddy, Andrew and Michelle are three bird enthusiasts who came to Rainbow Beach from the Sunshine Coast and Toowoomba last week to find some rarely seen bird species in this part of Australia, which have been spotted in our back yard recently.

The Welcome Swallows, Tree Martins and Fairy Martins are members of the swallow family, often seen hanging out together. Lately however a couple of ‘Barn Swallows’ have been spotted at Rainbow, blending in with the Welcome Swallows, and the difference is a black band under the neck and a white colouring under their wing instead of grey. Barn Swallows are very rare this far south.

They have also been even more excited to photograph the Eastern Ground Parrot in the Coastal Heathland of our Great Sandy National Park. This beautifully patterned, green ground parrot hides in the long grasses and low banksia bushes and is usually only spotted flying off after being disturbed by passers-by on the Sandy trails and roads. Our area is the best area in Australia for finding the Eastern Ground Parrot.

Even harder to spot in the heathland is the elusive Southern Emu-wren which is a tiny bird with a long (10cm) filamentous tail, made up of six feathers, usually held upright. Our area is the best in Queensland to find this little bird, if luck is with you.

Usually the Red-backed Fairywren and the Variegated Fairywren are seen there, but every now and then the Southern Emu-wren will decide to show itself, to the delight of these bird enthusiasts.

According to the group: “this area is a popular spot for ‘birding’ because there are a whole lot of different species here, including large numbers of shore birds in our area now that fly back to the Northern Hemisphere as far as Siberia for their summer. Inskip Point alone has around 213 different species of birds recorded as being spotted there.

“People love the Black Breasted Button Quail, which is known to be around the Inskip Point camp sites, but hard to spot as they are very shy.”

So keep a look out, and an ear out, as it is a fascinating subject and apparently we are in a perfect place to spot a rarely seen kind of bird.