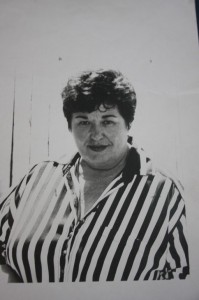 Ruth Modin was recently awarded the first (and only) prestigious life membership of Rainbow Beach Commerce and Tourism Association. For ten years, of this motivated and remarkable woman steered the Association’s committee as President. She reflects that many of the issues faced by businesses in Rainbow Beach back then like net fishing, illegal camping, beach closures, the golf course and a boardwalk, remain the same today.

Ruth Modin, 1996 outgoing President of the Rainbow Beach Commerce and Tourism Association, began her final speech with some bittersweet words, “This, my tenth and last report, is presented with both sadness and gladness…”

Sadness perhaps because an era had come to an end, but the gladness clearly related to a real sense of achievement. “It’s time to reminisce over the ten years,” Ruth continued, “and perhaps touch on a few issues some of the new members here may not know.”

“In 1986, when I became president, our bank balance was $328.27. Today the balance stands at $30,000 and we have spent more than $160,000 on brochures, TV advertising, Night Owl promotion and our Rainbow Beach video.” This was clearly money well spent as far as the profile and evolution of the town and its attraction are concerned.

Ruth’s drive and determination, combined with the help of dedicated locals, has transformed our town from its rudimentary beginnings and put Rainbow Beach on the map. In her time as president, Ruth had a very real sense of how to move forward when it came to the Association.

She summed this up in her words: “Let’s get back to the basics. Be unified not divided and use the Constitution as a set of guidelines rather than nit-picking the meaning of each word. This, my friends has stood us in good stead in the past and we have the runs on the board.”

Also known as the ‘Mayor of Rainbow Beach’, “ ‘Ruthie’ continues to work on behalf of town in many areas, including fundraising for the beach rake, making sure the cotton trees kept receiving “a hair cut”, supporting the school, nippers, and the all-important Fishing Classic.

In 1990 – over twenty years ago now – the Classic was just four years old but it already had put Rainbow Beach “on the map” – it was all run by the Commerce and Tourism Association.

“Our fishing classic,” Ruth highlighted in her 1996 speech, “is now the number one tourist attraction in the town and number two in the whole Cooloola region…And the 1996 Fishing Classic will also go down in history as the biggest ever.”

Maybe Ruth spoke too soon about “the biggest Classic in history”, because only twelve months later Rainbow Beach hosted the Australasian Fishing Championship. In 1993, they were appointed as the Queensland destination to host the lucrative event, and the association worked hard to woo the fishing fraternity to Rainbow. 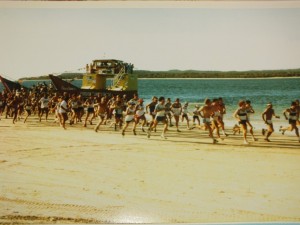 That year, 1996, the Association spent thousands promoting our town to every state, even producing a video. As if that wasn’t enough – they shipped mud crabs to the Australian Amateur Fishing Association meeting in Perth!

The event was such a success, that it etched Rainbow’s name firmly and permanently on the angling calendar! So many fish were caught, two teams filleted fish for two hours each night, that fed the competitors and lots of others around town.

At the close of her presidency speech, Ruth went on to explain to members where things stood. “Our achievement in 1995-96 has been one of great success. The Rainbow Beach ad on channel seven is screened now and again and leads the way in advertising our town for the benefit of everybody…”

“The new brochure has also had a great run; it went off to Sydney with Sam and Maureen to the travel show, to the Sunshine Coast Holiday and Leisure Show, and Tony and Rosie took it to the Kawana travel expo as well as Canberra, Melbourne and Sydney.”

“No, they’re not sitting in boxes doing nothing,” she added.

“During the past ten years, a lot of things were born.” In 1991 the Association bought Rainbow Beach’s first fire truck/rescue vehicle. And the following year the Brisbane Broncos visited Rainbow and a fundraiser for the ambulance raised $1,351.”

Ruth continued, “The fun run also took a bow on “Australia Take a Bow”, the Laurie Hanson Park is now ten years old, the middle block became a reality and will have buildings on it before 2000.” [Almost! Ed.]

In the early 90’s, squatters were top of the agenda, Commerce fought beach closures and agitated for net fishing closures from middle rock to third hump. Later it was reprimanding media and casting secret ballots. “We’ve kept the bastards honest,” Ruth said of the Shire.

Ruth fondly remembers, “Jim Fitzgerald and I having a three stubby committee trip around Rainbow to identify what we need to improve.”

“But we still have work to do on the road, the bridge, the golf course (it is recorded in the minutes in September 1986: Commerce makes it a project; WELL IT’S STILL A PROJECT !), keeping traffic on the beach. Let’s lead the way to a Boardwalk outlook and beautify the eastern lookout of the Laurie Hanson Park. Yes, there is lots to do.”

Despite all the unfinished business Ruth identified, she also outlined some of the significant changes: new playground equipment; lights were installed in picnic areas; the library was open every Wednesday afternoon; and much more.

“We also struck a new accord with our neighbours the Tin Can Bay Commerce Association, although they haven’t asked us back for a cuppa yet….”

These amazing achievements, that continue to benefit our community, are in significant part thanks to Ruth’s efforts and her dedication.

Ruth attributes the success of commerce to her motto: “Divorce yourself from outside influences. Forge ahead, confident in what you know is correct, fair and best for all around.”

Finally, Ruth – the outgoing President – addressed the meeting with some words of thanks and encouragement.

“I take this moment to thank the team, yes, it is a team… Nev Holt, my sounding partner… Judy who hadn’t finished until 5pm today with the secretary’s duties… Maureen, all true and correct again, our treasurer…and all of you who I did call on many times over the years to do this and that. Thanks a bunch.”

“And now with my sincere support to the incoming committee as your leader, may I use my motto for the last time: ‘Lead, follow or get out of my way!’ Now this time, I’m getting out of the way.”