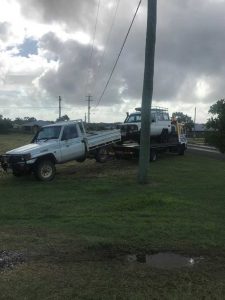 The proceeds of crime

Well the Easter holidays have come and gone, and with it have gone a few driver’s licences as well. We were supported during the holiday period by visiting police from the State Traffic Task Force, Roadside Drug Testing Unit, Tactical Crime Squad and the Mounted Unit.

The result was that demerit points disappeared faster than Easter eggs from a school playground.

One 37-year-old local man seemed a bit confused as he approached an intercept location to be met by an officer waving a stick resembling a pregnancy test kit. And – much like a pregnancy test – the man had a nervous wait after supplying a specimen of saliva for a drug test.

Despite him crossing all his fingers and toes, two pink lines appeared on the stick to indicate what he already knew: he was driving under the influence of methamphetamine. The man was issued with a 24 hour suspension and a notice to appear before court.

Now you’d think that someone like this would learn from their mistake and avoid driving until he was sober. However, three days later he was intercepted again. Again he had a nervous wait and again he tested positive. Having tested positive twice before his initial court appearance, the man’s licence was surrendered pending the outcome in court.

Thanks again to our visiting police for helping keep our roads free of blokes like this.

On a more serious matter, thanks can now also be given publicly to officers from the Drug and Serious Crime Group and Gympie Criminal Investigation Branch following the closure of Operation Argillite.

The largest operation of its kind in this area, the investigation spanned drug trafficking across a decade, and resulted in the arrest of four local men for Drug Trafficking, and a network of others on charges including drug supply and production of cannabis in the forestry area.

The operation was the culmination of many years’ worth of information received from the public from a wide variety of sources.

I know there has been sentiment for some time that ‘nothing is being done’ about this particular drug network, but that was not the case – plenty of work was being done quietly and patiently in the background, and the result is that a major syndicate has been dismantled.

An important component of the operation was the freezing of assets. All of the ‘toys’ that these people had (such as cars, houses and bank accounts) are now subject to proceeds of crime legislation. What once may have appeared as a lucrative lifestyle – will now amount to nothing.

Hopefully this should send a clear message to any aspiring criminals: at the end of the day, crime doesn’t pay.

Ultimately, the success of this operation would not have been possible without your support! Every little bit of information helped, and Crime-stoppers (1800 333 000) continues to be a safe and anonymous way to play a part in keeping our community safe.

We look forward to working in partnership with you into the future.