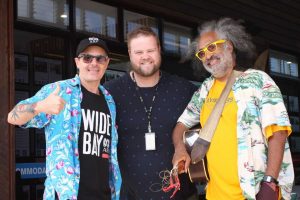 They were here recording the Festival of Small Halls, and followed up with a live breakfast broadcast from our Main Street. Coffee Rocks supplied a great venue – with lots of comments from local foot traffic.

We made sure the message got across that despite weather forecasts, we’ve had beautiful days for our start of summer, and that our lack of traffic, and laidback life here, make for a perfect holiday!

As I was leaving, the final performer from the night, Vance Gilbert, arrived for his recording, I thanked him again for his wonderful performance – saying we just don’t get that in Rainbow Beach. He quickly replied, “You guys have got to get out more!”

If you have an event or issue you’d like on local radio – let us know. We hope to see Brad and Ross back soon.