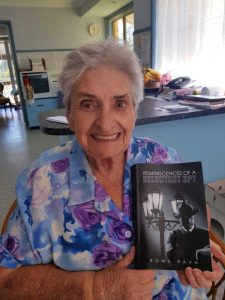 Roma Ravn with her latest novel Reminiscences of a Reluctant Spy

Move over Ian Fleming, there’s a sensational new spy novelist in town. Roma Ravn’s Reminisences of a Reluctant Spy has all the twists and turns of a 007 novel. The only difference is it’s the biography of Steven Kovacs life and remarkably 100% true.

Roma herself was sceptical of some of his claimed feats however after seeing his skills first hand she did not doubt his authenticity.

Steven and Roma met whilst living on the same road in Cedar Pocket over 20 years ago. Through numerous conversations she took down his life story in shorthand notes with the intent of one day writing a book.

Fast forward 19 years, Roma finally decided to put the true tale together. Her first task was to relearn shorthand so she could understand her notes!

Mr Kovacs was a Hungarian businessman dealing in textiles and uniform manufacture.  He was unwittingly thrown into the spy world during WW2 by the Hungarian government who took advantage of his worldly travels for business.

On discovering his party in spying on other nations, Steven was running scared. After an attack on his wife, they escape to Australia and started a new life full of adventure.

Roma Ravn herself has lived a full life; she was the first female geologist employed by the Australian government. She recalls attending the job interview and the male interviewer stated “But you’re a girl” to which she held both hands to her chest and replied “Yes!”

She spent the next 34 years in virtual solitary in the Australian outback that nurtured her creative mind. Her 21st birthday was celebrated with a sip of bubbly from an empty baked bean can!

Being in isolated areas Roma has witnessed numerous unexplained events so naturally she ran a UFO group in her retirement. She now expresses herself through Toastmasters and has been a member for over 20 years.

As a teen in the late 1940’s, Roma entered a competition to write a Mills and Boon novel and won a trip to Norfolk Island with her submission ‘Wild Brothers.’ Taking a break during her working life she took up writing again, first with a cookbook (despite limited domestic oven skills) followed by two biographies.

“I have had so many life experiences and the stories are running around in my mind,” Roma explained. “Putting life onto paper makes the stories available to everyone.”

After finishing her latest book, Roma went searching for Mr Kovacs and his wife Agi. His house in Cedar Pocket had been removed; only a bare block remained. No neighbours knew of his whereabouts and she couldn’t find any death notices. Roma remembers Steven’s words of “the government never forgets” and can’t help but wonder if the past finally caught up with him.

If you love a good spy novel then get yourself a copy of this must-have book that will have you intrigued, as it is all true. Reminiscences of a Reluctant Spy is available on Amazon Australia, eBay and Gumtree or contact Raewyn Oliver on 0412 995 512 for further information.