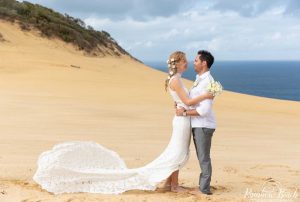 “We never thought that this would have ever happened, meeting our true love in a pub!” smiled Manuela (known as Ella).

Their chance meeting was in September, 2014: Ella was catching up with a friend after a trip to Orange; Justin had gone in to watch the football. Then they set eyes on each other. Justin struck up some conversation with Ella, who was from Germany, and it went quickly to talking about where they were from.

“Justin was very surprised that I knew exactly where Bathurst (near his hometown of Lyndhurst) was, and about the Bathurst 1000.”

Since Justin is a pilot in Houston, Texas, and Ella is a hair stylist at Rainbow Hair and Beauty Studio, it is just as well they have, as Ella says, “Totally have figured out how to survive a long-distance relationship”.

When the time came for Justin to propose, he made it one to remember – in Surfers Paradise, after a fantastic weekend at the Gold Coast 600.

Zaneta Fitzgerald officiated at their ceremony on Rainbow Beach. Said Ella, “We had a lot of weather challenges, but the rain made it even more fun and memorable for everyone.The sky was so dramatic – amazing for the photos! When the time came to sign the papers, the sun came out!”

The couple celebrated their event with a small reception on the Deck at Sea Salt.

There’s no honeymoon just yet, said Ella, “I dropped Justin back to the airport two days after the ceremony. We both have to work.”

They look forward to being happy anywhere in the world, together.