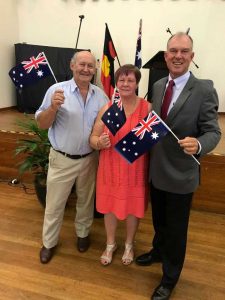 Congratulations to Tony Stewart from Rainbow Beach – he has won Gympie region’s 2018 Citizen of the Year on Australia Day.

MP Tony Perrett posted a photo, and Tony responded – “Thank you all for your great help. You are all part of this huge shock to me.”

Tony sends an article to the Community News without fail every edition (but he was unaware of this one).

For February he reinforced that, “The drought continues in Western Queensland and with no rain forecast in the immediate future, you can imagine how diabolical the situation is around Longreach. I have seen first-hand the impact the drought is having on families in this area.

“Being away for a month it has been hard to run this business, but I am travelling back via Bendigo to meet with Rotary, as they have offered me a large amount of basketballs, jerseys, and carry bags. Possibly up to 1000 for school kids out in Western Queensland.”

Tony initiated and orchestrated the very successful “Rainbow Beach Droughtrunners”, raising cash every month to send to the farmers out west.

For over two years, he has driven to Longreach so many times, loaded with deliveries for the smaller communities and farmers and families to help them put food on the table. He is preparing for the 16th load.

Bush to Beach Kids was his baby – his initiative to bring children from the drought to Rainbow Beach and Tin Can Bay and experience a holiday away from the farm worries and for some of them to enjoy their first swim at the beach.

He was so involved – cooking, touring and supporting the busload of kids and teachers who were here from Ilfracombe and Muttaburra districts.

He organised TV, radio and newspaper coverage for this event to highlight the plight of farmers, and lack of government support they receive, and high rates of suicide. It also promoted our region as a tourism destination.

After a grant and another possible fundraiser fell through, not to be deterred, he drove the creation of a gala dinner in Rainbow Beach which raised over $15,000 for the Bush to Beach Kids initiative.

“Kids Bush to Beach is definitely on again this year, with many schools from the drought area very keen to come across after hearing the reports from last year.”

He reported that schools interested include Jundah and Windorah, “Raising funds is always hard, but I know many raffle books have been sold which is a great start, with the winners heading to Fiji.

“Another fundraising event will be held in either Gympie or Rainbow Beach with an entertainer and sit-down dinner. Hopefully we can bring a committee together soon to finalise the plans for this.”

He has worked with Droughtrunners, Lions Club Tin Can Bay and groups in Gympie, and rallied business owners and locals for donations.

He is relentless in his quest to help the farmers – putting off his own holidays and attending to his own health, delivering groceries, toiletries and more for them, in the hope that rain will come.

Working closely with the Drought Angels in Chinchilla, he has leveraged help further, and gained much support from Victoria to send supplies to the farmers.

Current secretary of the Rainbow Beach Commerce and Tourism Association, he continues to work with businesses and locals to support our farmers in drought.

We think he is wonderful, he has such compassion and drive, a volunteer supporting all the groups who have supported Rainbow Beach Droughtrunners, he truly deserves the highest of accolades.

We know that Tony is forever grateful to every person and business who have made a contribution – from the IGA vouchers to baking fruit cakes, and he has one last plea – to “please rain!”