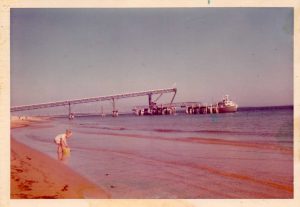 Fisherman, skipper, boat builder, not quite mechanic, somewhat engineer and all around tinkerer of everything land and sea, Ian Dean has been an integral part of the Cooloola Coast’s short history. So much history, we’ve had to share it across two editions… here’s part one.

“I moved from Gympie with my parents to their holiday house in Tin Can Bay in 1964, I was aged 16. My father bought a fishing “party boat”, taking 8 – 10 men, fishing and crabbing the sandy straits. We fished for whiting, jew, squire, bream, tailor…”

Think of a street name in Tin Can Bay and they fished for it!

“The trawling industry in Tin Can’s early days was the most exciting time of my life! No one knew where you were, there was no radio contact, no lights, no phones, nothing!”

When the road to Rainbow Beach was constructed in 1965 to allow access to the Queensland Titanium Mines (QTM) project in the area, the trip into town became much easier for Ian and the other workers stationed in Tin Can.

“I started working at QTM as a lab tech for some years. I did all the assaying (analysis of a material to determine its substance and quality) of sand samples all down through Freshwater Road, Fraser Island and all around Double Island Point.

The drillers would come in and out for ten days, take samples, dry them all, split them up, do the assay for each hole, each depth, then I’d transfer them over to a big map, to show where all the concentrate was.”

Ian would then coordinate with the samplers to ensure the efficiency of the processes. The mineral concentrate would be separated and sent out a large chute to a pile for later processing, the tailings would go back to fill the cleared area.

“If the concentrate had too much sand in it the shift bosses were sleeping and weren’t keeping an eye on their machines!”

The sand mixture would be separated using a cyclone, the heavy minerals falling to the center as it rotated. This concentrated mix was rinsed in a caustic tank to dissolve the heavy metals and separate organic material and quartz (sand) as waste product.

Ilmenite, which is magnetic, would be extracted using an alternating current that would generate a magnetic field. The remaining materials would then feed down into the hoppers, and then be split up as Rutile, Zircon, Monazite and shipped to Brisbane for further processing.

“Rutile was used for making titanium. Zircon was used to make paint and glass and a few other things. The Monazite was radioactive, but I used to swim in it! I would do mill testing, making sure the weighbridge belts were right.

It was bloody good, it was interesting. I did it for about three years I think.”

Completing the holy trinity of Cooloola Coast living, Ian also spent time working and living at Cooloola Cove. Originally owned by 13 business people from Gympie for the pasturing of 2500 head of cattle, Ian spent a brief period working on the property before it was sold to a Melbourne consortium for the development of housing.

“I was only there for a small time. The cattle pastured from Endeavour all the way down to the bridge on Investigator. I had built my house on Investigator Avenue not long after that so they must’ve opened it up about 40 years ago now.” 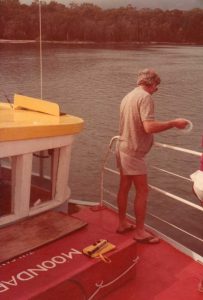 Ian handline fishing on his boat the Moondarra – 1978

The Barges and Fraser Island

In 1972, while working in his spare time on a 48ft trawler, one of many built over his lifetime, Ian received a call from Rainbow Beach’s first land owner and operator of the Fraser Island ferries, Gordon Elmer.

“I got a call from Gordon one day, to say his skipper was ill, could I drive for the day? I knew Gordon for many years prior and was happy to start driving for him. When I first started he had a few barges already. He had The Dawn but The Lady wasn’t built yet, I think he had five in total.”

When Gordon retired the services, the barges kept on working, being sent to various locations around the country. The Dawn 2 was sold on to Stradbroke Island mining ponds as a service vehicle, transporting workers and fuel.

The Lady Fraser was sold to Richards Branson for the service of his Makepeace Island at Noosa. Amateur drone footage recently surfaced online, showing her crossing the Noosa Bar on her way north to service islands around Airlie Beach, being sold on from its service at Makepeace.

“I stayed with Gordon until his retirement in about ‘89.”

“In the early ‘80’s I had the boat Moondarra, and we ran a two-in-one tour. I used to leave Tin Can, go to Bullock Point, pick up people from both places. John Hawley was my business partner at the time.” 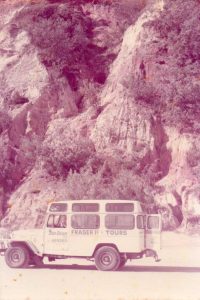 They would then hit the beach with a 4WD, taking passengers up the beach to Dili village, Lake Boomanjin, Birrabeen, down through “Yankee Jack” rainforest and back to Garry’s Anchorage to meet the boat again.

“It was great running those tours, everyone had a great time!”

Next month we cool things down with Ian’s history of the Iceworks… and a few other tall tales!