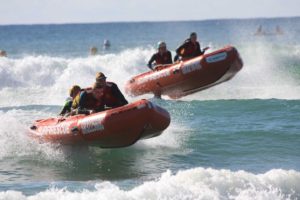 Mark your calendar June 2 and 3 – the exciting IRB Ocean Roar event is in Rainbow for its second year – you won’t want to miss it!

Shane said, “We’re looking at end of May, early June – we thought it would be a lot longer as it is a six month contract.”

The development will include a kitchen, meeting room, training room, storage, dorms, access for people with disabilities, lounge rooms and more.

It will house two dormitories, one with 16 beds, one with 20 beds and will be 460 square metres in total.

The new build will give the Supporters Club floor space to expand and grow. Plans are already in the design stage.

The Supporters Club provides funds so lifesavers can patrol Rainbow Beach. Every bit helps, like the generous donation pictured from PFD Foods which will buy nippers gear and every time you dine at the club or come to the Friday night raffles, it all benefits our town!

The new wing is now being painted inside and out and members can’t wait.

Shane said, “They all can’t believe how big it is – they all want to see it!”

Shane is also looking forward to the inflatable rescue boat (IRB) Carnival next month, “It’s exciting, the young members love it – it is something long term we’d like to look at competing in, as a foot in to get our surf sports up and running again.”

He explained the event is massive and there were hundreds who attended on the beach last year. The high-octane IRB racing event has a large following in Queensland.

“Somewhere like Broadbeach had 35 competitors, these guys help each other, our members do get involved even though it is not in patrol season – it is a pleasure to run.”