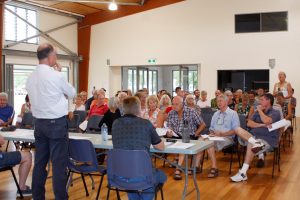 You can still have your say until April 18

Make your voice heard on the electoral boundaries. Submissions were due March 27. But from April 8, you are invited to comment on the objections – this closes on April 18.

The final determination on Queensland’s state electoral districts is on May 26, and unless they see enough opposition, Rainbow Beach will be collared into the Noosa electorate.

What does this mean? We aren’t talking about rates, or council boundaries here – it is purely for state, not local government.

State boundaries can be a precedent for changes in council areas.

Did the Commission have their math’s heads on or take into account geography?

For a Rainbow Beach resident to access our representative, we’ll have to drive through Gympie and a further hour to Noosa – a four hour round trip. The Coastal Link road is not sealed, you can drive down the beach at low tide for most of the year, but this is not accessible for all.

There is no public transport to Noosa from Rainbow Beach, and by calculation the trip would take over three hours – one way!

What do we have in common with Noosa – vegetation and tourism perhaps, but all of our community interest is with Gympie.

It is a measly 564 votes that Rainbow Beach offers (booth count in 2015), but the proposed borders annex not just Rainbow Beach, but straight up the Tin Can Bay Inlet to Inskip Point.

A public meeting hosted by the Rainbow Beach Chamber of Commerce last month, was attended by a surprised MP Tony Perrett, Mayor, CEO and Councillor, and we were told you could be standing at Norman Point in the Gympie electorate, looking at the dolphins swimming in the Noosa electorate!

Which brings me to the matter of most concern: the proposal severs the communities of the Cooloola Coast.

We are in Tin Can Bay every week to join a community group, work and shop. Our  youth attend schools across the towns. We have Tin Can Bay dragon boaters from Rainbow Beach and Nippers from Cooloola Cove. Our history and our community are shared.

We agree with Cr Mark McDonald – Rainbow Beach is a part of the Cooloola Coast.

What political pressures will Noosa MP Glen Elmes will be under?

In the past, beach access has been threatened. Our precious Double Island Point is already under the control of Noosa Parks Association Inc.

The proposed borders include the pristine waters all the way to the Gateway to Fraser Island – Inskip Point.

Our 600 or so votes could be very valuable to Noosa.

We believe the proposed Gympie electoral boundaries are not practical or sensible.

All the submissions will be up on the website from March 27. We were urged at the meeting to respond to every submission, and make it positive to those you support.

But if you think a submission is ridiculous, or need to be challenged, you have the right to take that further April 8-18:  http://boundaries.ecq.qld.gov.au/have-your-say

Geoff Apps: If there is to be any substantial growth in population in the foreseeable future, it would be in areas closer to Noosa/Tewantin, so it beggars belief that this decision was reached by a logical process.

The Electoral Commission has ignored its own guidelines and plucked a remote township, with a static population, 60 kilometres away, with no infrastructure in between and placed it under the control of an electorate of the heavily populated Sunshine Coast.

Garry and Julie Hewitt: These proposed changes could mean we may lose control of what happens regarding the future of our beach regulations and the town of Rainbow. This may also impact the future use of the waterways of Tin Can Bay.

Leave Rainbow Beach in the Gympie electorate where the needs of this community are understood and historically connected.

Tony Stewart: So easy online, everyone just do it. Don’t cry later if it goes against your wishes!