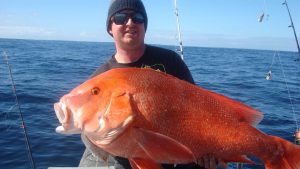 August is usually a great month for fishing and I won’t lie, it’s been pretty tough! With consistent westerly winds and a higher water temperature than normal, it’s been a little harder to get those good catches.

From what I have heard from a lot of people travelling, it’s the same story everywhere. We have however had good days out wide with decent catches of large parrot, pearl, and Moses perch, squire; also sweetlip, snapper, and a few nice red emperor, the best at 14.5 kilo, and the odd snapper up to 7 kilo along with sweetlip.

Along the beaches Taylor have been very slow this season with the occasional greenback, however no real numbers. Those who follow facebook will know, but for those that don’t; we are running a big fish competition every month until the end of December.

This has a monthly winner earning a respectable prize and automatically going in the draw for the overall prize drawn December 31, which is a full day Fishing Charter.  A photo of the monthly winner and their fish will be posted in this article.

Congrats to Jeremy for July with his 14.5kg red emperor. ‘Til next month, hope it all improves and happy fishing!