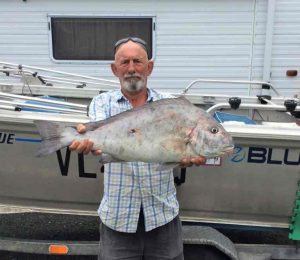 Derek Andrews with a 72cm slatey bream caught on squid

I hope everyone had a great Easter break and were able to wet a line, and as an added bonus maybe catch a fish or two. The club was able to hold several fishing events over the past month, but because of the weather some events were cancelled.

The club’s Weighmaster manages entries in our members monthly competition and has received several entries that showed there are some quality fish to be caught. Species include mangrove jack, slatey bream, tusk fish, bream, cod, whiting, sweetlip,and pearl perch.

Our club competition requires members to provide a photograph of their catch on a brag-mat when submitting an entry.

The aim behind this is to decrease the numbers of fish being caught and killed simply for competition purposes which in turn assists with improving the sustainability of our fisheries. The club encourages a catch and release approach to fishing where members only keep enough fish for a feed or two.

The winner of our competition for March was Ian Nowell with a 68cm Pearl Perch; there were also some notable catches by Ron Cox, Derek Andrews, Mal Kay, and Tim O’Brien. As at the time of preparing this article the April competition had not yet been finalized.

Despite some wet weather the club was able to hold a couple of social events, one of which included some training. Members attended a lunch at the Tin Can Bay Country Club and a BBQ lunch/training session was held for members at our clubrooms where approximately 80 members attended.

Club member John Blackman provided a demonstration and training in the use of a cast net and Chris Rippon from The Chandlery Bait & Tackle (and a club member) gave an informative demonstration of the art of knife sharpening. I’d like to pass on a big thank you to both John and Chris.

We have now received advice from the Department of Agriculture and Fisheries that funding has been approved for us to hold our annual fishing workshops for members of the public.

There will be two events for Juniors, consisting of 10 places in each event and one event for Seniors with 20 places available. Once the money is in the bank, we will announce the dates and invite applications to attend.

Well that’s it from me, if you have any queries, please feel free to contact us by email tcbfishingclub@bigpond.com or phone us on 0437 242 171. There’s also our web site and Facebook page if you want to check us out.