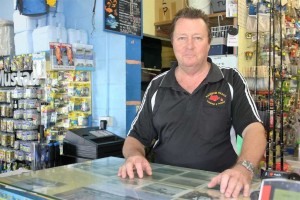 Wayne Jones from Rainbow Beach Camping and Tackle will be stocking up his bestseller – 15kg IQF ready for Easter!

There’s frogmouth, white, blue sardine, and you can get pilchards individually quick frozen or IQF for those in the know!

Along with your squid, mullet, prawns, worms, Wayne Jones from Rainbow Beach Camping and Tackle stocks them all.

A couple of months ago, Wayne received an unexpected call from down south. Followed up by others with the same question.

“They just asked – am I still stocking 15kg IQF; then they said they read an article in the Community News. I reassured them, ‘yes’.”

Unfortunately we’d written in the Community News that there was only one supplier of 15kg ‘pillies’ in town.

Wayne says these dedicated customers from Sydney and Melbourne have been coming through the shop in the 13 years they have owned the business.

“Every year they come up – I put the local community paper away for them. Now they go online to read it.

“Then there are the locals! They asked me the same thing.  A lot of people would see that too and wouldn’t contact me.

“I am surprised to get such a response. I thought it was a good thing, really. For two reasons: people still want to buy pilchards and they read the Community News!

“They were concerned – they buy three-to-four boxes at a time. Pilchards have been stocked here for 18 years!

“Obviously, the paper goes far and wide, a lot of people read it.”

At the Community News office this is music to our ears, thanks Wayne!

Today alone there were over 300 people who visited the website and in the last six months there has been an average 5, 500 visitors every month.

The January edition of the online paper  with the ‘pillies’ article was read by 158 people online, mostly from Australia, but also Angola, the UK, South Africa and Indonesia. They totalled over 11 hours reading time:  49% read it on their desktop, 24% on their tablet and 27% on their mobile.