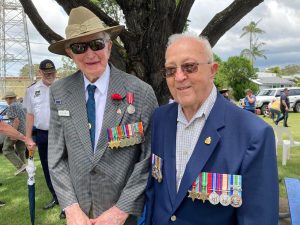 For the lead-up to Christmas, our usual monthly morning tea was replaced with a gathering at a member’s home to watch the André Rieu spectacular DVD “Home for Christmas” which was filmed  primarily at Rieu’s home, a romantic medieval castle in his hometown of Maastricht in The Netherlands.

Our Christmas party will be at the Rainbow Beach Surf Club.

Instead of our normal guest speaker, in November two members told tales of trips overseas.

Val McClurg spoke of the “quick trip around the world” that she and Graham made in 2006 when they were invited to a wedding in the United Kingdom. During their three months away they especially enjoyed the Canadian Rockies which had been on their bucket list, and also cruised the inside passage of Alaska.

Katrina van den Brenk spoke of the year she lived as a fourteen-year-old with her Melbourne family on the island of Rarotonga in the Cook Islands, in the days before tourism there. With no schooling available at her level she joined the local women and girls in their daily activities in the village; and netball matches, Girl Guides and church at weekends.

World War II veteran, Arthur Leggo, laid a wreath on behalf of the club at the Remembrance Service held in Tin Can Bay.

We have now ceased our meetings for the year, but will return in February to meetings held on each second Monday of the month at 2.00pm at the Sandcastle Motel in Tin Can Bay. These include a break for afternoon tea and a chat. For more details please contact our President Daryl on M: 0416 739 324 or Secretary Katrina at cooloolaprobus@gmail.com