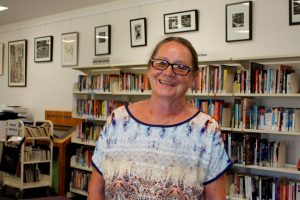 “I held an exhibition here at the library, after the Brushes by the Sea Art Festival.” (Lena doesn’t mention she won two awards in 2016.)

The interest grew from there, and classes are attended by six or seven people.

“When it comes to printmaking it is good to have smaller numbers,” said Lena. “Some just show up for inspiration – they come and go.”

Lena doesn’t charge for the classes, she says they are the highlight of her week!

I asked Lena if she had always been an artist. “I came out to Australia in 1981. I had to give up my work – I was nurse, midwife and teacher to nurses and midwives in Sweden.

“I wasn’t allowed to work. I was furious.”

Despite her excellent qualifications and experience, Lena needed Australian accreditation.

“My husband said ‘just do the things you love to do’. So I attended Brisbane Institute of Art – I spent six years there and specialised in print.”

Lena also taught at St Paul’s School in Brisbane, but prefers her current class who hope to hold a group exhibition in the Community Hall later this year.

“They are all adults – there of their own free will. I am very proud of all of them – they are all very creative – that makes teaching easy. ”

So inventive, Anthea Stevenson produced an O.B.E. for Walter Dobkin’s 80th birthday, insisting his actually stood for “Over Bloody Eighty”.

And there’s more to etchings and printmaking, Lena tells me some of the works displayed have a political message, “To me it has to have a double meaning  – genuine thoughts coming through.”

There’s much Lena plans for the group. “There are more different kinds of print making, more etchings, old fashioned and newer ways, where you don’t have to use acids.”

Lithography is a different process – that works on the principle that water and oil don’t mix. Kitchen lithography uses foil, vegetable oil and coca cola!

She told me they have had the house here for seven years, “I didn’t mean to have a printing studio. As I have it, my garage now has a full printing press – what a Christmas present!”

A recent technique was lino cutting, “Now I have the press, it makes it easier to print and more even.”

And where do they find their inspiration?

“It is such a special place to live and be creative in Rainbow – we’re so lucky to be here. A walk on the beach in the morning. What more could you ask for? We have a very good life.”

Do visit the library and see works by Rob Young and Paivi Lobigs. All prints are for sale. To find out more about the art or group, call Lena on 07 5486 8731.