Home  »  News   »   Have your say on Cooloola Cove Parks masterplan 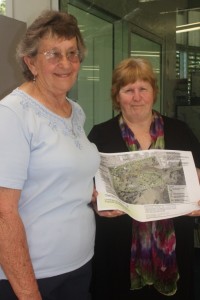 “To say we are excited, after waiting seven odd years for the draft masterplan to be presented, is an understatement.”

The announcement of the public consultation for the Gympie Regional Council draft masterplan of two parks in Cooloola Cove was “a day of great note”, and occurred a few days shy of the 11th anniversary of the official opening of the playground equipment in Centenary of Federation Park.

“This was a great achievement by our group. We obtained a grant from the Community Benefits Fund of $28,733.00. With much lobbying we also had toilets, a picnic shed and BBQ installed there, all of which are much used.”

Billabong Park was named by the group and they did massive amounts of beautification. The weed clearing and replanting is ongoing to this day.

The BMX track was also realised with their support. Jackie continues, “A first look at the plan seems to show that areas we have been in consultation with GRC about for many years have been addressed, in part. So we are pleased. For example, shade sails over the play equipment.”

The draft plan for the Centenary of Federation Park allows for:

They also requested a skate park in Billabong, helped by the lobbying of 12-year-old, Izaac Cole.

Acting Mayor, Cr. Tony Perrett says, “The draft plan notes the existing activities within each of the two parks; it recognises requests from local residents for the provision of a skate park and public amenities at Billabong Park, as well as improved pedestrian linkages, landscaping and enhanced picnic facilities.”

“The increasing costs for maintenance of large areas of underutilised parks and reserves have also been taken into consideration in the draft masterplan,” Cr. Perrett added.

CCRFI are looking forward to working with council to achieve the best possible outcome for our community, so keep your eyes and ears alert for council’s planned open day at the Veterans and Community Hall.

Jackie says, “This is, after all, something that will affect all residents, families, visitors, and tourists for years to come.”

The draft masterplan will be displayed on Council’s website: gympie.qld.gov.au, and at council’s libraries until February 28, 2015. The open day at the Cooloola Cove Hall will have councillors and staff in attendance.