Home  »  News   »   Snakes on the prowl before hibernation 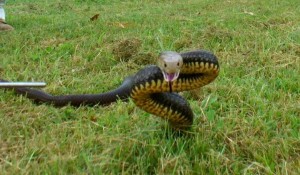 Local amateur herpetologist, Trevor Black, enjoyed the historical perspective on treatment of snakebite in our last issue, and requested we remind locals how snake bites are treated today.

It is timely. RACQ CareFlight Rescue have reported 11 snakebites in the past few months – in fields, kitchens and sheds across southeast Queensland, including Fraser Island.

When asked why snakes were more mobile, Trevor said, “I would suggest this is likely because breeding season is over and the new crop of hatchlings will have started to emerge. As some species incubate their eggs, the females will now also be on the look out for a much needed meal. The female carpet snake will have not have left her eggs since they were laid and she may not have fed for a couple of months.”

“I wouldn’t want to be a chook or guinea pig about now,” he added.

When asked about relocating snakes, Trevor said, “David Beck from Cooloola Cove is your man. He is also the only qualified person within Rainbow–Tin Can area. He is fully licensed and trained to provide this service for a small fee.”

David Beck agreed that there have been more snakes about. “I had five pick-ups the other day. They are feeding ready for hibernation and they do work their way into people’s houses. Just before the cyclone, they wanted to get in houses or up high to get away from the weather.”

“We have the most venomous snakes in the world – we’ve got everything! Taipans, browns and death adders – we’ve got baddies here in Cooloola.”

“People ask me how they can have a snake-free yard. There is no such thing. But you can make it less snake friendly by getting things off the ground. If you can see a snake – you’re safe.”

Anyone found to be operating as a snake catcher without proper authority can face hefty fines. You are at risk if you contract an unlicenced snake catcher, David says, “If they are bitten or hurt in the process, they can sue you.” 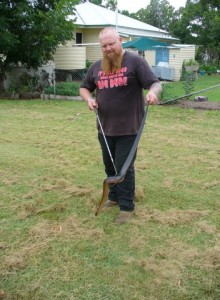 David Beck is the only qualified person on the Cooloola Coast to remove snakes, here he is with what he calls a “beautiful red-belly black”

David has helped treat snakebite too. Last season someone was bitten when they tried to pick up a small taipan. “A little snake can give you as much venom, or more, than a big one.” He explained big snakes can give a warning bite or meter its venom to a half dose, in case it needs to bite again.

Dan Coad, Red Cross National First Aid Advisor tells us, “If it’s a snake bite, the person who has been bitten will usually feel pain. Look for fang marks or swelling.

“Call 000 immediately if you suspect the person has been bitten by a venomous snake.

“Ensure you calm and reassure the person and keep them still. Apply a pressure immobilisation bandage to the affected area. Start by covering the bite and moving the bandage to the edges of the bite area, and then back up to the top of the limb marking the bite site on the outside of the bandage and immobilise the extremities. Keep the bitten part still and try to lower the person’s heart rate by keeping them calm and still unless it is absolutely necessary to move them.

“Contrary to popular belief, do not apply ice or a tourniquet to a venomous snake bite, do not cut the wound and do not apply suction to try and remove venom.

David warned, “Do not wash the area, and do not try to kill the snake.”

If people try to kill or capture the snake, they may be bitten a second time. Medical facilities don’t need the snake for identification.