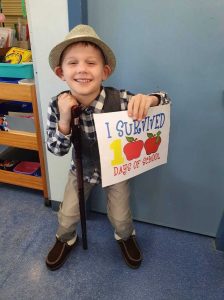 from Tin Can Bay School

Prep students celebrated 100 days of school by dressing up as little old men and women.  Activities for the day focused on the number 100 and included a chicken scavenger hunt.   The students enjoyed their “100” cake and look forward to the next 100 days.

Performers from the Grin and Tonic Theatre Company presented an interpretation of Shakespeare’s Romeo and Juliet at the Tin Can Bay State School hall. Our students were joined by the Year 10 students from Kilkivan P-10 State School and the Mary Valley State College, who have also been studying this play.

As this was their first introduction to the works of William Shakespeare, the students benefited greatly from the visual and emotive elements in the presentation, which enhanced their understanding of the characters and their motives.

The drama was performed with two actors filling a variety of roles, with the support of students who volunteered to fill some small roles. Students were impressed with how cleverly the young performers told the story of the two star-crossed lovers, using a series of flash cards and dioramas projected onto the stage.

Following the performance, the students were able to ask the actors questions about the performance and their experiences being actors. The Year 10 students were left captivated by Grin and Tonic’s production of Romeo and Juliet and look forward to seeing more live theatre!

Tin Can Bay Instrumental Music students recently performed in the Gympie and District Eisteddfod held at the Gympie Show grounds in The Pavilion.

The Instrumental music section took place over two days, with the Primary School Concert Band category being the largest category in the section. This comprised seven entrants, in excess of 200 students!

Although the students were not awarded a place in their category, the concert band performed very well and were awarded 81 adjudicator points. The winning band was awarded 87 points.

The concert band represented themselves and the school with distinction and learned a great deal from the experience.

A selection of Year 5 and 6 students competed in the 2021 Gympie Primary Team Challenges for Maths and English at One Mile State School.

The Tin Can Bay School English Team number 1 were runners-up in the Language Conventions section (Part B) of the competition. What a great effort!

In previous years Tin Can Bay has competed in the Small School category. However, this year due to increased student numbers, the school entered as a large school, competing against the likes of Gympie West, One Mile and Gympie South State Schools.

Well done to everyone who took part in the competitions! A huge thank you to Mrs Rebecca Turner, Ms Sandra Carroll, Mrs Evelyn Ozanne and Mrs Shari Buczynsky for coordinating and facilitating the events!

Thank you also to Coastwide Charters Tin Can Bay and Leonie Devlin, for donating the use of their van to transport the students to the Maths and English Team Challenge.