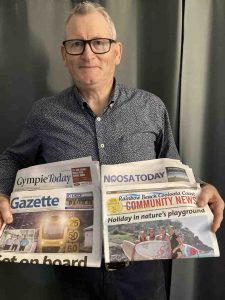 The Palaszczuk Government’s move to allow government agencies and developers to stop placing public notice advertisements in newspapers is another step backwards for accountability in politics.

President of the Queensland Country Press Association, Phill Le Petit, of Noosa Today, said that instead of being made aware of local developments through their local newspaper, regional communities will be in the dark about what is going on in their area.

“By taking these development notices out of the public eye, there will be much less scrutiny of government and private development projects,” added Mr Le Petit.

“Development applications regularly generate considerable community debate and it will certainly not be in the public’s best interest or help to achieve practical consultation and beneficial outcomes for communities if the requirement for publicly notifying the general community is removed from public gaze.”

“This is totally incorrect and bordering on embarrassing from the Treasurer,” added Mr Le Petit.

“The Queensland Country Press Association represents 46 newspapers across the state and that number is growing, with 22 new publications joining as members in past 12 months. The combined monthly audience across these member newspapers totals 1,336,953 and that does not include figures for state and national newspapers bought and read in Queensland.”

Mr Le Petit said the Treasurer’s comments about the overwhelming majority of Queenslanders sourcing most of their information from online publications is a false comparison.

“When it comes to Queenslanders getting their news, the overwhelming majority get their local information from newspapers or from news that is sourced from newspapers.

“Instead of supporting local businesses who employ thousands of Queenslanders, the government has struck another blow, in what can only be seen as an attempt to avoid scrutiny.”

The Treasurer said this ‘shake-up” of advertising rules was a way for the government to rein in its spending and ballooning debt. Changes will allow statutory public notices to be advertised on the Department’s website or online news sites.

State government advertising in regional newspapers has been virtually non-existent across QCPA member newspapers, compared to what the Victorian and federal governments has done.

The Victorian Government, instead of shrinking their advertising through tough times in the media industry, pledged to spend an extra $4.5 million on advertising in regional newspapers.

The Federal government ran many advertisements throughout the last year, which, no doubt would have helped keep many newspapers afloat.

“For the health of our democracy and the viability of local businesses, we urge the Treasurer to reconsider this decision, added Mr Le Petit.