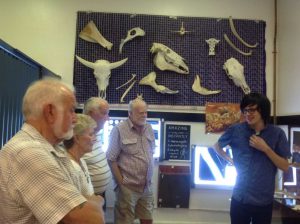 Our group listens to the guide, Daniel, at the Gympie Bone Museum

A group of the over 60s visited the Bone Museum in Gympie situated in an Arcade off Mary Street. Daniel, our young enthusiastic guide, explained all there is to know about various animal bones, skulls and skeletons.

One of the main features was a Dromedary donated to the Museum by a family who named it Nora.

Our group then followed on with a scrumptious lunch at the Gunabul Homestead on Gympie Southside. The Homestead was originally built in 1885 for Francis Power (solicitor), his wife and 12 children.

Since 1970 Gunabul has been used as a function venue and the adjoining space converted to a 18 hole par- three golf course. An informative enjoyable day well spent!!

Next meeting is Tuesday March 5, 10am Rainbow Beach Surf Club.