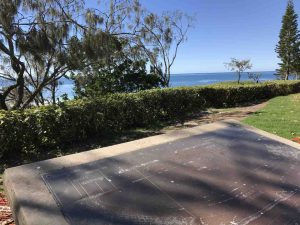 Near the Rainbow Stairs – Before 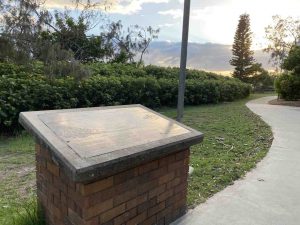 An ongoing issue in Rainbow Beach is the overgrown cotton tree, walking from the rainbow stairs to the lookout – as views are totally obscured.

Once again I asked Council, when will it be attended to? And, for best use of resources, the next time it is pruned – please can it be trimmed at a foot high, like it has been in the past (rather than as tall as a person, and blocking our views)?

Cr Jess Milne said,”The cotton trees are a difficult one as I understand they had missed some pruning rounds and did grow out. If pruned back too hard too fast there is risk of die off and they are crucial to bank stabilisation.

“I raised this concern with the Parks Manager early on as I had noted some cotton tree die off in TCB after a hard prune and it is also in a high wind area.

“While it would be great to have the views, the erosion control benefit is something that needs to be cared for otherwise there might not be a walkway to enjoy the views from.”

Unfortunately, as a tourist town, we rely on that view.

Before we lobbied for the view to return and be trimmed low a few years back – it had also been while between pruning rounds – and that cotton tree just keeps surviving.

If there was die off – surely a more suitable bush could be planted, perhaps something that didn’t require a cherry picker and expensive pruning – rather than something that only requires a few weeks before it is overgrown again?

Jess responded to our query, “I believe the trees were planted back in the ‘90s as erosion control mitigation. I think there have also been numerous shea-oak and pandanus plantings back then as well. Unfortunately the latter two didn’t do so well but the cotton trees have done the job, so I suspect replacement planting would not be viable or practical.”

Cottonwood trees have been under scrutiny in the nearby Cottonwood Tree Study at Shelly Beach and Currimundi, April 2019 for Sunshine Coast Council.

Locals acknowledged a divide in their community regarding Cottonwood trees. Concerns included: