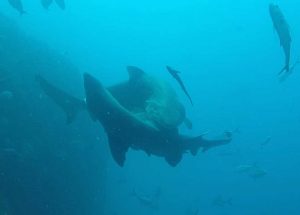 As many of you would be aware, we are lucky enough here in Rainbow Beach to be the only known site on the East Coast of Australia to have pregnant Grey Nurse Sharks (Carcharias Taurus) all year round.

Wolf Rock is the only known area, to science, on the entire East Coast that is home to these critically endangered animals for their entire gestation period. The female sharks spend between 9 and 12 months growing their offspring in the warmer waters of Rainbow Beach before venturing south to pup.

Male sharks reach sexual maturity at between 4-6 years of age and the females between 6-8 years. Both males and females reach maturity at about 2.2 metres and have the potential to reach up to 3.6 metres long.

During the autumn and spring months we are lucky enough to see larger than average numbers of males on the site because these periods in the calendar are known breeding times for the critically endangered shark.

Grey Nurse Sharks have a distinctive and altogether violent courtship process where male sharks will follow female sharks for periods of time and then latch on with their teeth to subdue the female.

It is a common site for our divers to see copious and sometimes quite large scratches and bite marks among the resident population, as they all vie for their chance to be the successful breeding partner.

Only recently were our divers gifted with something considered exceptionally rare: the Grey Nurse Sharks beginning mating courtship in front of our very eyes. Some were even able to capture it on video.

Grey Nurse sharks are more active at night when they hunt and interact so this behaviour is rarely (if ever) seen. Whilst it looks and sounds violent and aggressive, overall it appears to do little damage to either shark in the long run.

Grey Nurse Sharks are ovoviviparous sharks, meaning the shark embryos develop inside eggs that are essentially hatched inside the mother over a period of time after internal fertilisation.

These embryos then have the opportunity to develop and grow in the mother’s oviduct before being born live, up to one-year later.

The benefit of this mode of reproduction is that offspring are readily developed inside the uterus of the female shark and are better equipped to fend for themselves immediately after being born.

It is the only known species of shark to engage in a form of intrauterine cannibalism known as embryophagy or adelphophagy. A severe demonstration of ‘survival of the fittest’ whereby the largest and strongest embryo literally eats its lesser wombmates (i.e. its siblings) prior to birth.

When the shark embryo is approximately 5.5 cm long it will hatch from the egg case but remain inside the uterus and begin to develop teeth. At approximately 10cm long the embryos will then consume each other until there is only one left in each of the mother’s uteri.

Eventually, the mother shark will give birth to two live young. This happens only every two years. This is the lowest reproductive rate (fecundity) of any shark species, making it extremely susceptible to external pressures such as fishing and entanglement.

If you would like to experience this rarely-before-seen behaviour give us a call on (07) 5486 8004 or visit our website.