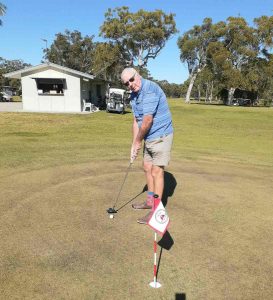 The month of June was a very wet month but eventually we managed to play some golf.

The men completed their 72 hole stroke championships with Tim Fennell becoming the Club Champion for the year 2022. The men also played their matchplay which was finalised towards the end of the month after being rain delayed.

The ladies played their first 18 hole competition on Thursday 9 June, which should have been played on the Wednesday but the course was still too wet.

The Men’s Vets hosted Noosa Golf Club on 14 June with local men winning in all divisions. The Noosa men managed to take a few nearest to pins.

James, our resident Professional, has had an end of financial year sale. He always has specials on the whiteboard at the entrance to the Pro Shop. including balls and other equipment necessary for the keen golfers. He will take bookings for lessons on 0409 727 577, or call into the Pro Shop. Golf clothing and footwear is also available for purchase.

Anyone wishing to take up golf – now is the time to join the club. Membership fees to the Country Club are from 1 July to 30 June annually. Call into the front counter where the staff will help with the necessary paperwork.

Look forward to seeing new members on the course.