It is probably time a misconception was clarified. Although the association was formed because of widespread community concern about the Rainbow Shores Stage 2 development,   it is not opposed to development per se. The association believes that any development should be judged on its merits in terms of benefit to the community and environmental impacts, both positive and negative.  We can all see the unsightly remains of a failed development as we drive in and out of town, so serious consideration should always be given to development proposals.

No doubt everyone is pleased to see the continuation of the Clarkson Drive footpath from Griffin Esplanade to town at long last. There has been considerable advocacy over a number of years for this to occur. Pedestrians, especially those pushing strollers, will be very glad it has finally happened.

Some of the casuarinas planted on the foreshore have survived despite the extremely dry weather conditions.

We have written to GRC about a number of issues – people parking on traffic islands in the town centre; littering, particularly the provision and location of bins and suggestions for signage relating to littering and, lastly, beach signs at Rainbow Shores. There has been no response to the first two, but a direct approach to our local member, Mark McDonald, resulted in an email telling us that someone would be in contact about beach signs at Rainbow Shores. Unfortunately, since then (September) no one from GRC has been in touch. We will continue to pursue these issues as we believe they are important.

We were concerned about what had happened to the Masterplan process, especially in relation to public consultation, so sent an enquiry to David Gibson, our local MP, who had not responded by the date of our last meeting. A letter  to the Minister for Infrastructure asking what is planned for the undeveloped section of Rainbow Shores Stage 1 when the current lease runs out has been forwarded to the Minister for Mines (?!) and has yet to be answered. As with communications with GRC, we will continue to request a response from the government  re issues that are important for the community.

The first meeting of the year will be the AGM and will be held at the SES shed on Tuesday 11 February at 7pm.  Residents and potential residents are most welcome.

Editor’s Note: Terrific to see the paths on Clarkson Drive, after so much lobbying, from so many groups and individuals in town – including playgroup.  The road gradient meant cycling and pram pushing was always difficult in that section. Hopefully the orange, temporary fencing will be removed before Christmas! Don’t council realise holidays started a few weeks ago?

Image – Once again, unsightly fences are on display to all our school holiday traffic, this time on prominent Clarkson Drive 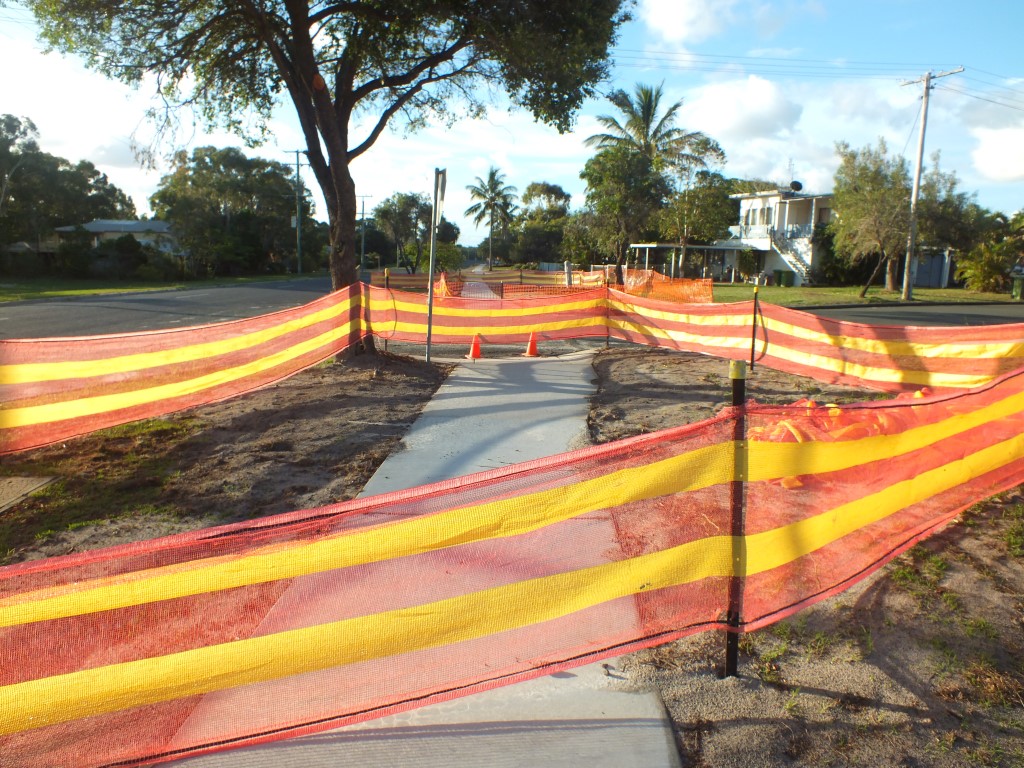