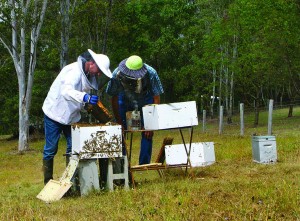 This image is not of the hives in Rainbow Beach

Bob Butter was staying at his son’s holiday house in Cooloola Drive, and was walking near the Rainbow Beach Waste Facility when attacked by bees last weekend. His dogs did not survive.

Bob couldn’t return home to Logan, stung multiple times himself, he said, “It’s the first day I’ve been up on my feet.”

An apiarist friend has told Bob that dark colours may aggravate bees, and the two dogs were black and tan Doberman stumpy tail cattle dog cross.

It was confirmed that bees can respond to furry animals, particularly black as they are sometimes interpreted as their natural predator – bears. This is why beekeepers wear white.

“I had the dogs 14 years, they wouldn’t have done anything to the bees.”

Bob said there are approximately 30 bee hives about 200 metres down a 4WD track near the Rainbow Beach dump gates (at the very end of Kurrawa Drive).

“It’s more of a concern if kids go up there or anyone walking their dogs – the bees could be aggressive to anything coming around the hives. I don’t know what ticked the bees off.”

Dr. Shannon Coyne from Gympie Veterinary Service said, “There are 2 kinds of death by bee sting. The first is anaphylaxis or hypersensitivity which is a severe allergic reaction causing shock and death. This is the kind we are all more familiar with.”

“The deaths of these dogs were due to the second kind which is a massive amount of toxin. It is not allergic in nature, it is actually envenomation like you expect from a snake or spider. We don’t see this as you need enormous numbers of bees to provide enough venom.

He said that usually this occurs in the USA or Africa, “It is very rare in Australia”.

“The general numbers are: less than 14 bee stings per kg body weight the animal survives, 14 -24 is critical, more than 24 stings per kg is always fatal.

“These dogs were about 20 kg so would have had at least 300 stings each, possibly double that. There is no prevention except avoiding the bites.”

Residents have also reported that swarms of bees have been observed in Bombala Drive.

“Investigations are being undertaken by the department into why bee hives have been placed without authorisation on this land.”

“The department has identified the owner of the hives and instructed them to immediately remove all hives from this state land.”

“The department will contact the local Council to work with them to restrict access to this land and erect appropriate signage.”

“We strongly encourage all members of the community to stay away from the area while these actions are being undertaken.”

The Community News has also contacted National Parks, Council, the local Bee Keeper’s Association and spoken to the Queensland  Department of  Agriculture and alerted the Police and School.