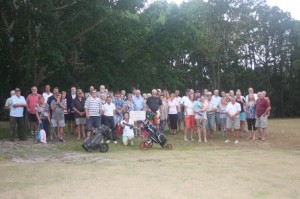 There is still no word from State Government to council on the Rainbow Beach Golf Course land. Council made a submission for the Master Plan, until it is released – there is little to advise on. To join a local action group, please contact Jay Kent at Cafe Jilarty.

Our view is back. Pruning of the second tier of cottontrees at the lookout has occured and budget allocations are in place and a program to maintain these areas ongoing maintenance has also been established.  Council indicates that this issue is now fully resolved.

The Rainbow Beach Boardriders memorial noticeboard was removed by Gympie Regional Council during maintenance works to the lookout and surrounds as its condition had deteriorated substantially.

An interim replacement will be erected in time for the Memorial Classic on the 6 December and Council will involve the local community and those associated with the Boardriders memorial to develop the permanent memorial.

The form and placement of memorials is a difficult and sensitive issue for family and friends of the deceased and can be also be distressing for some members of the general public.

Council intends to establish a passive memorial area for the remembrance of passed residents of Rainbow Beach as part of the rehabilitation of Lawrie Hanson Park. This proposal and the intention to incorporate the memorial from the viewing deck is part of the Rainbow Beach Foreshore Parks Revitalisation Plan which was adopted earlier this year after consultation with the local community.

Please contact council if you have a personal affliliation with the memorial, as they are seeking consultation with the community on this issue.

Council will also be carrying out improvement works in the islands at the end of Rainbow Beach Road in the shopping centre precinct, including additional plantings, replacing the damaged irrigation system and placing bollards to prevent vehicles parking unsafely. The works are expected to be completed before the Christmas holidays. Some parking spaces may be affected and Council apologises for any inconvenience.

Council is also currently completing safety improvements to the Tin Can Bay Skate Park. The concrete extensions and earthworks have addressed drop-offs and exposed edges which have occurred over time through erosion. These works on this well used facility will be finished shortly and available for the locals and visitors for the school holidays.

A new project will upgrade of the culvert and raise the road level at Mullens Creek on Investigator Avenue. This is to improve the flood immunity at this location (ie reduce time of closure due to flooding).

The project is being designed so that Investigator Avenue will remain open while construction is underway, but reduced to single lane under traffic control. Whilst culverts have been delivered, work is not planned to commence until April/May 2015.