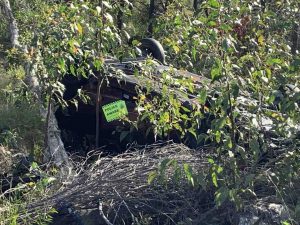 Have you ever had the feeling that you’ve already experienced the present situation?  It’s called Déjà vu, and I’ve had a strong sense of it lately.

Take a look at the attached photograph of a crashed vehicle, upside-down in the bush at Roy Weber Plains on Rainbow Beach Road.  2021 was only minutes old when this car crashed, and regular readers of this column will remember last month article also featured an upside-down car –a four-wheel-drive which had rolled over at Double Island Point in December.

In fact, if you were driving on Rainbow Beach Road early in the New Year, you would have seen two crashed vehicles – in different spots – but both upside-down in the bush just off the bitumen.  Not a great start to 2021.

If you look closely at the attached photo, you can see a bright, fluorescent sticker on the car with the words, ‘POLICE AWARE’ printed on it.  I’m sure most of you know the meaning of this sticker.  We put them on vehicles that have either crashed or have been left abandoned on the side of the road, to let the public know police have already attended and investigated.

Last week – as I drove past this smashed car for the umpteenth time – I found myself mulling over the words ‘Police Aware’ and thinking what else it could mean.  I came up with a bit of a list…

I’ve written so many articles about road safety recently I have a definite sense of Déjà vu as I’m typing away here.  Unfortunately, the accidents keep happening, so I guess my question is – “Police are aware of the importance of road safety – are you?”