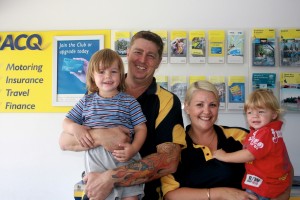 Three boys, two dogs, two ringneck parrots and one profanity screaming  galah (with a fear of anything that flies) made the sea-change along with new RACQ owners Garry and Katie Sanderson.

“When this came up we jumped at it.” said Katie.

Trading in her high heels and their good stable jobs, “We wanted a lifestyle change. Bailey starting prep, put it in perspective for us.”

“If we hadn’t done this, there was no way we could have picked them up from school and after school care costs a fortune.”

“It was all such a blur, with the boys in care 13 hours per day, 5 days per week. Our jobs were one hour ten minutes drive to Brisbane City.”

They bought the RACQ off their old friend Robbie Rye. “Robbie still looks after Roadside Assist and towing, we look after the mechanical workshop and offline insurance/group membership.”

Katie says there was a lot of work when they split the business in half early November. As a Suncorp team leader,  she managed personal insurance  for Toowoomba and Brisbane floods and Gary is a mechanic.

“It’s been a steep learning curve for me, not Gary.” No wonder! Katie still fits in amongst the phone calls, deliveries and customers, cuddles with her boys, supervising toy cars and craft, school pick ups and swim lessons.

Garry’s family owned the Rainbow Beach Caravan Park and grew up with Robbie. Katie said, “Robbie had been trying for years to get us up here, but it had to be the right time.”

It didn’t take many holidays to Rainbow Beach, “I fell in love with the place. I’ve always dreamt about [living here], it’s even better now with the kids.”

It has been an adjustment and Katie admits she’s juggling, that it has been hard as working parents who didn’t see the kids as much to  a home office and kids “24/7”.

She says they pack a beach bag every day, pick their own swimming spots for boys  Bailey (5), Sebastion (2 1/2) and Logan (1 1/2). After swim lessons there are plans for nippers.

With no more 2 hour commute, Katie tells us Gary just has to say ‘Geez traffic is bad today’ as they walk “two seconds” to start their workday.

They are both smiling, “We’re here for a very long time  – to watch the kids grow up.” (Don’t worry, the swearing bird is kept out back!)