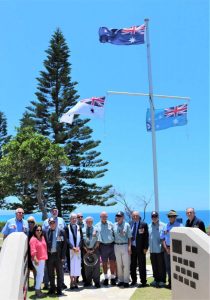 At 1045hrs on Thursday 11 November the Rainbow Beach RSL Sub-Branch will be conducting a ceremony at the Cenotaph to mark Remembrance Day.

Remembrance Day, which was originally called Armistice Day, commemorated the formal end of hostilities for the Great War (World War 1). The signing of the armistice occurred on 11 November 1918 – the 11th hour of the 11th day of the 11th month.

Red poppies are worn on Remembrance Day to remember those who died during a war.

Remembrance Day in Australia is dedicated to Australians who have died as a result of war, particularly World War 1.

All members of the local community and visitors are invited to attend the ceremony at the Cenotaph to pay their respects.

As this year is the 100th Anniversary of the Royal Australian Air Force, we are honoured to have two guest speakers being Wing Commander Justin Cockroft from RAAF BASE Amberley and Councillor Dolly Jensen from Gympie Regional Council.

Remembrance Day service starting at 10:50am at the ANZAC Memorial Park, followed by a snag sizzle (gold coin donation) back at the Sub-Branch