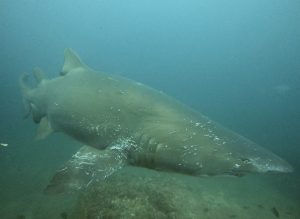 Mating scars on the one of the Grey Nurse Sharks at Wolf Rock.

If you see a Grey Nurse Shark (GNS) at Wolf Rock through-out year the chances are that it is a female.  That is because Wolf Rock is the only known site in Queensland where pregnant GNS aggregate.

However, between the months of October and December the Male Grey Nurse Sharks arrive for mating season and the encounters can be up close and personal!

The boys are very active and regularly come up to our divers to see if we are potential breeding partners!

Thankfully for our divers we are not the Sharks cup of tea as the pre-mating courtship is a violent and brutal act.

The boys will follow a girl for a short period before attempting to latch on, they don’t have hands, so they use their mouths to bite the pectoral fin of the female shark before finally mating.

The female Sharks are often not interested and violently let the potential suitor aware of this fact with an equally aggressive retaliatory series of bites.

We have witnessed this spectacular behaviour on a couple of occasions and it really is a sight to behold: two three metre Sharks weighing upwards of 200kg biting each other in a whirlwind of mayhem!

This behaviour must be going on a lot during this period as all the Grey Nurse Sharks on the site are covered in deep mating wounds.

The importance of Wolf Rock to the survival of the critically endangered Grey Nurse Shark species is unprecedented and is the reason it was made a Green Zone.