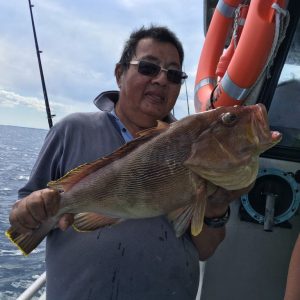 Traditionally during the winter months, reef fish in the bay have been fairly quiet with only the occasional quality fish, including a cod of over 13 kg, being caught.

There have been reports of just under size snapper being caught on the ledges and reef areas so be aware of the size and bag limits.

Squid are still being caught in good numbers and seem to be widespread throughout the bay. The average size seems to be increasing, possibly because they are reaching the peak of their life cycle.

Large green toad fish have been crunching a few squid jigs lately so make sure you have a few spares of your favourite colour with you.

There have also been reports of bream being caught in the bay and on the beach with a few quality fish amongst them and are a worthwhile target species, particularly around the full moon period around dusk and dawn, if you are willing to brave the cold.

A few quality summer whiting have been caught in the shallows on the rising to high tide recently by those targeting them with yabbies.

With both patience and persistence both whiting and bream can be caught in the shallows on small surface and minnow type lures, so ask the local tackle store for advice on specific types of lures.

The recent weather event with cold blustery winds that swept across southern states and into southern Queensland has somewhat curtailed fishing activities lately for all but the most avid anglers, but when the opportunity arises to get out on the water there have been a few quality fish landed.

There have been a few queen fish caught recently on trolled lures and cast hard body lures and surface lures, so keep an eye out for bait fish activity which could attract predators and target these areas.

Flathead have been a bit elusive lately with only a few being caught on soft plastics. Their prints have been seen on the exposed sand banks when the tide is out so maybe they are feeding in the shallows on the night time high tides. They could be worth targeting on the early morning high tide before they go off the sand banks to wherever they hide in the daytime.

A few tailor and a couple of jewfish have been caught off the beach recently, so that could be worth a try on the dusk high tides.

In summary, there are a few fish of different species around and the only way to catch them is to have a line in the water – give it a try when time and tide permit and the rewards may come.