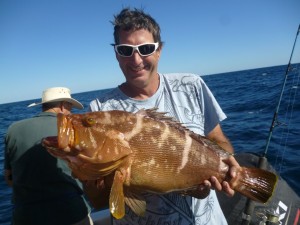 Well after a two month break via the outback, three funerals in Vic, the Man from Snowy River Festival at Corryong with 20,000 others, two weeks work near Geelong and then the highlight of Rosie’s mother turning 100 on Anzac Day, it has been busy.

Baitrunner was re-launched on May 4 and we have had just the two Charters since.

We have cancelled numerous trips due to weather, which is foul as I write this. Hopefully we will see a return to sou’westers soon and some decent settled winter weather.

Hopefully a drop in water temperature with the sou’westers will see the start of the Snapper season.

‘Til next month – good fishing.