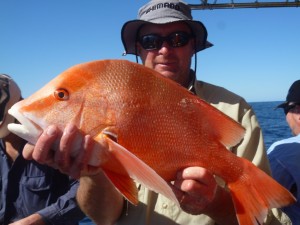 It’s hard to believe another month has flown by with spring & the dreaded Northwesters just around the corner.

Catches at the end of July, early August were exceptional with most Reef species being landed in good numbers.

Snapper were plentiful, especially in  the 3-4 Kg range, with a few around 6 kilo. Maori cod and spangled emperor were also in good numbers.

Moses perch some days were coming in two at a time and another species out wider in good numbers were parrot. Hussar, gold spot wrasse, pearl perch & sweetlip were other species landed.

Fishing tapered off 3-4 days after the moon and the weather has also been up and down with many days over 20 knots. On the New Moon pearl perch have been in good numbers from the close reefs, with a few snapper, but mostly squire size with Moses perch, parrot & sweetlip.

A few red emperor were also landed on the wider grounds this month.

Till next month, good fishing.