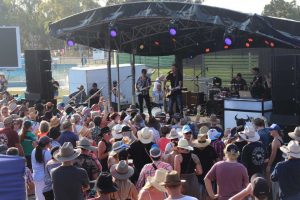 One thousand people attended the event

So good was Rainbow Beach’s first Country at the Beach, that organiser and Sports Club Manager Nathan Kropp (better known as ‘Kroppy’), plans for it to be an annual event.

December 7, 2019 is the first Saturday of summer, and I know I’ll be making sure I have tickets!

“People were from Sydney, Brisbane and from out Roma way. One lady came straight from chemo,” Kroppy said.

You can see why Travis Collins is a six times Golden Guitar Winner and back-to-back CMC Male Artist Of The Year. We were sitting next to folk from Rockhampton, and behind a family from Bundaberg – all who specifically came to see him. None of us were disappointed.

I was one of the many volunteers on the day – and worked one of the three bars. The Rainbow Beach Surf Lifesavers received a generous donation; the P&C take the earnings from their stall which will help with a school camp.

As a thanks to the Rainbow Beach Cricket Club loaning their 25-seater bus, Kroppy is helping them organise a special celebration for an upcoming home game. Rainbow Beach Boardriders will benefit via their Memorial Competition.

The town was booked solid, so they ran a bus to Inskip Point.

I congratulated Kroppy on it being so well organised. He said, “That’s Marnie. It is thanks to her it ran so smoothly. It’s been ten years in the making to get to this – now it is a money earner.”

He said he had two negative comments. One was the heat, so he’s planning a circus tent for next year. The other was there was too much food in the VIP area. “I’m happy to change that!” he smiled.