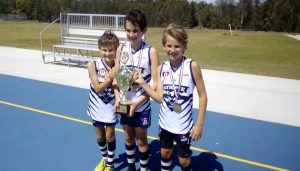 With AFL the family favourite, mum and dad Annie and Andrew Kingsley, from Rainbow Beach Fruit, were thrilled their boys’ team made the Grand Final.

Andrew said, “It was a unique game for them, as they won’t be in the same team together again.”

Throughout the 2017 season, the three boys, Charlie (13), Nathan (11) and Alex (9) played in the same team,  the Gympie Cats Under 12s . The Sunday competition extends across the Sunshine Coast to Bribie Island.

“In the Grand Final, they played Maroochydore, the top team and won the game by four points.”

“The under 14s also made the Grand Final – but the Under 12s was only team to win the competition. The win was big deal for the club.”

Charlie also won Runner Up of the Best and Fairest for his team. He and his brother Nathan plan to move up to the under 14s next season.