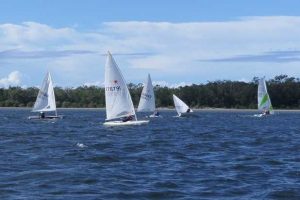 Racers faced challenging conditions in the final of the Spring series

The last of the Spring racing series went out with a bang, in some cases literally.

The weather forecast was for 10 to 15 knots northerly but in reality was a good 20 to 25 knot northerly gusting to high 20s occasionally, making launching a challenge and testing maintenance plans for a number of boats with some gear failure and early retirements.

Despite the conditions, eleven boats faced the starter’s gun for the dash to the start with the multihulls making easy work of the reach out the creek and the square run down the southern inlet towards the bottom mark.

Throwing caution to the wind the flying fifteens hoisted their spinnakers for the downhill run and were rewarded with some exhilarating rides. The work back to the finish line was heavy going for most and particularly tough for the Lasers in the gusty conditions, but well done for toughing it out.

Weta Nuff made easy work of the conditions and took both line honours and the handicap win.

The second race was started in the remains of the incoming tide with Second Safari cracking the pin end start on port leaving the rest of the fleet in catch up mode.

Weta Nuff and Billy the Kid (BTK) rounded the top mark in the lead positions with Bubbles in hot pursuit under spinnakers just ahead of Second Safari.

Weta Nuff’s spinnaker drop didn’t go to plan which let BTK and Bubbles through to fight out the work toward the finish line with BTK crossing for line honours 9 seconds ahead of Bubbles who took out the handicap win.

By the third race the tide had begun to ebb but the conditions called for conservative starts. Weta Nuff cleared out to take a strong lead for line and handicap honours which was held to the finish in the creek.

BTK followed but shortly after rounding the top mark was hit by a big gust and chose to leave her spinnaker in the bag as did the rest of the fleet except Bubbles.

On approach to the bottom mark Second Safari went for the old involuntary gybe and the big broach move which pitchforked the skipper through a reverse somersault in half pike position earning a water rescue for the rescue boat crew.

The remaining crew aboard sailed off home and claimed salvage rights rather than risk a hanging for mutiny. The last boat home was aided by the outgoing tide which was gladly accepted by the many tired crew in the fleet.

Back at the Clubhouse, refreshed from some cool drinks and warm pizzas, all incidents now in the past, the crews are ready to do it all again in the first races of the Summer series.