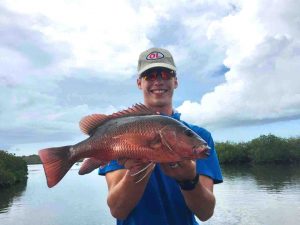 Alex Brantz with a Mangrove Jack

December and January mean one thing to us at Gardiner Fisheries – It is Mangrove Jack time.

Considered one of the most elusive sport fish, we are privileged to have an always angry population of Mangrove Jack in our waters.

Being an ambush predator, Mangrove Jack give little warning of their impending strike. When they hit it is game on. Lock up your drag and hold on!

For the bait fishos, nothing beats live baits. Live herring, whiting and flicker mullet are lollipops to the Jacks. Large strip baits like mullet and bonito as well as whole pilchards will also bring them on the chew.

Lure choices vary depending on the amount of structure. We recommend surface lures along with lightly weighted soft plastics. Weedless rigs will reduce those snaggy hook ups in the mangroves.

A lighter line class of around 20-30lb may result in higher strike rates but unless you are ready for the strike, you’ll likely get smoked in the snags.

Lifting line class to 40-50lb gives you a fighting chance. We recommend fluorocarbon leader of about 120cm in length and between 60 – 80lb. Overkill??? Well, if you’re getting busted off, chances are the angry Jacks are winning.

December 26 was kick-off for our annual Jack Attack competition. Running for two weeks this is your chance to get your share of over $3500 in prizes. Entry is FREE with any purchase.

For all the comp details, local advice, along with your bait, tackle, firewood and ice, follow us on Facebook or drop in and see us at Gardiner Fisheries,  1 Karoonda Rd, Rainbow Beach.