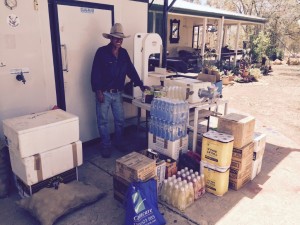 Richard Cribb from “Gydia Park”, Isisford with some supplies from us

When it’s time for a rare week of R&R, the farmers often support us by holidaying on the coast. So, it’s only fair that we think of them by giving something back in their time of need.

And Rainbow Beach and our region is doing just that. Representative, Tony Stewart ventured through Barcaldine to Longreach last week, all loaded up with provisions for farmers.

“It’s really bad,” Tony shared. “There is no stock. No water. Any pasture is black. It’s a lot worse towards Winton as well. It’s a big area. I’m told if you fly over – it looks like the moon.”

Tony said that with farms totally destocked, the situation is desperate. “It’s pretty sad. There is absolutely no income – they are just looking to put food on the table.”

Appeal for women’s toiletries
The good work will continue, thanks to Marilyn Dean who is organising more aid to go west before Christmas.
Thanks to a lot of locals, they were able to send out a big box of supplies with Tony.
“Now we’re asking for women’s toiletries. Drought Angels have told us it is what women forgo so they can feed their kids and horses,” Marilyn said.
“Razors, soap, moisturisers and deodorants. When you do your shopping, it’s easy to pick up an extra item. It doesn’t matter how big or small – it all helps!”
“We’ll keep collecting until we have a decent parcel to go out.”
Drop any items up off the Iceworks on Karoonda Road (the industrial area) in Rainbow Beach.
To find out more, call Marilyn on: 0427 358 744

On a positive note though, there have been terrific donations of food and supplies for families out there.

The Progress Association gave $2000 of Food Vouchers from IGA – from the Spring Festival, thanks to generous donations received for the event.

Drought Support case worker from Centacare, Rex Fegan, was very appreciative, “A big thanks to Tony Stewart and everyone in the background, as I could get these goods to folk that need it the most.

“I handed over $1000 worth of IGA Gift cards to be distributed amongst the neighbours surrounding Gydia Park.”

Once again thank you to all who have helped these people in need.