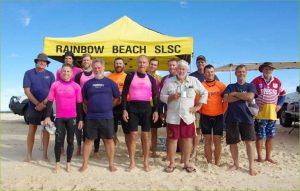 Conquering 300 kilometres in eight days, metres from whales, in remote locations, tackling legs and some long trudges inland carrying their surf skis, and in winter, it is possible our crew of surf lifesavers may be the first ever to paddle skis around Fraser Island. Considering some of them call themselves “old boys”, our community should be rightly proud them and their Fraser Island Marathon Ski Paddle! Thanks to Garry Hewitt for his photos and Kim McCarthy for this account….

When members of the Rainbow Beach Surf Lifesaving club embarked on the inaugural Marathon Ski Paddle from Brisbane’s South Bank to Rainbow Beach in 1993, it is unlikely the paddlers would have anticipated paddling around Fraser Island 25 years later – but that’s what a crew of 14 from the club have just completed.

That first paddle was organised to raise funds to purchase a 4WD vehicle, allowing club members to better deal with the myriad of incidents and accidents the club was called on to attend between the Cherry Venture and Inskip Point.

In those days, the club was the first port of call for assistance, with people arriving at the clubhouse at all hours of the day and night to alert members to situations requiring urgent assistance.

When the Queensland Surf Lifesaving State Centre heard what was being planned and why, it chipped in most of the funds and a brand new, bright Red Holden Rodeo 4WD Ute, complete with canopy, OxyViva, stretcher and First Aid kit became a fixture on patrol and left at the club to be used for immediate dispatch.

Ironically, its acquisition coincided with the emerging mobile phone technology which meant that people needing assistance could phone emergency services directly and our involvement in these type of incidents declined quickly.

Nevertheless, on one occasion a tour bus rolled over at the southern end of Fraser Island and two of our off-duty members were quickly on the scene administering first aid for 20 minutes before the rescue helicopter arrived.

The television news that night featured plenty of footage of the good work of the helicopter crew with scant mention made of the critical assistance provided by the club.

While the club hasn’t conducted a marathon ski paddle every year, some of the memorable ones include a paddle from Urangan to the town of 1770, several from Brisbane and the Sunshine Coast to Rainbow Beach, three around the Whitsunday Islands, several through the Sandy Straits and the Inside of Fraser Island and one along the Hawkesbury River and into Pittwater on the northern side of Sydney.

Marty Baldry has always campaigned for a circumnavigation of Fraser Island noting that Captain Cook couldn’t do it and it was unlikely many others had, and certainly not paddling skis. The logistics seemed too hard.

While the eastern camps could be accessed easily, many kilometers of travel were necessary to service camps on the western side of the island. With time marching on, those young men of 25 years ago are now getting a bit long in the tooth, so it was a case of now or never.

Luckily some very good people stepped in to offer assistance. Garry and Wayne Hewitt and their wives, Julie and Janelle, planned the menu, bought, prepared, cooked, packed and froze all the food. Garry and Wayne then transported around the Island.

Along with Ron Organ, George Handy and John Lister, they made up the land-based support crew with five vehicles and lots of equipment, setting up camps around the Island and feeding the paddlers as they finished each leg. 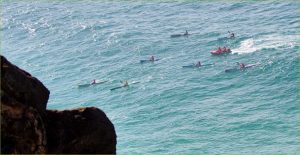 The paddle commenced from Inskip Point at 7am on Saturday June 9 with the first leg a 38 km paddle around Hook Point, across the adjacent sandbanks and north, with an at times uncomfortable side chop making progress tiring, to Eurong where accommodation with hot spa, BBQ dinner and early night were enjoyed by all.

Conditions on Day Two  were good with a gentle southerly breeze helping us along and the night was spent at Cathedrals Campground.

Day Three, we paddled 18km then enjoyed breakfast in the lee of Indian Head, before paddling around Waddy Point to Orchid Beach for the night, staying in accommodation organised by Bill Wilson.

Day Four allowed for plenty of fun as the waves peeled off all the way to Sandy Cape, topped off with a lovely clear night camped on the beach, looking north over the protected waters inside the Breaksea Spit.

The north-westerly arrived as predicted on Wednesday morning, generating a tiring side chop on the 21km paddle to Rooney’s Point.  Arriving at Rooney’s we couldn’t help but feel a little overwhelmed as we took in the sight of the sand cliffs fronting the Platypus Bay shoreline, curving south then south-west 60km into the distance.

We spent Wednesday night at the Wathumba Creek campground. Thursday morning, we continued the paddle south to Moon Point, arriving in the early afternoon. This time we were looking back at Rooneys Point with some astonishment that the sweep of coastline,  only 24 hours earlier, looked so daunting, was now behind us.

On Friday we paddled south with the incoming tide past Kingfisher Bay Resort to the ex-forestry, now national park campground at Ungowa. Ross Kidd and Mark Langton were waiting on their boat with a feed of freshly caught flathead and whiting cooked to perfection.

Day Seven, Saturday, dawned a beautiful morning with no breeze and mirrored water and we rode the incoming tide to Garry’s Anchorage for smoko, then the outgoing tide all the way to Inskip Point, arriving at 2.30pm.

The total distance was a little over 300km, the shortest day being about 30km and the longest 50km.

The highlight? Probably the whales that joined us just as we made it through the break at the start of Day Three.

It was a memorable week for all involved, particularly for Alex and Courtney whose son Noah arrived Sunday noon.