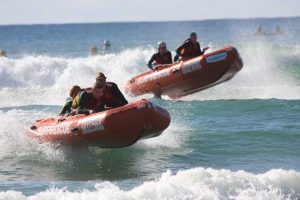 Spills, thrills with Ocean Roar on June 1-2 and brews and BBQ!

This year, there are even more reasons to come down to the beach on June 1 and 2 to watch the high-octane event, inflatable rescue boat (IRB) competition, Ocean Roar.

As competitors from Surf Life Saving Clubs around the state fight it out for a surf rescue supremacy, you can relax at a beach bar over brews and a menu from Beauty and Beard.

The action alone is worth making your way to the beach. The races are all about simulating rescue situations and testing the abilities’ of drivers and crew people as they’re transferred to a competitive setting.

Aside from the spills and thrills of the competition, the event is a real reinforcement of lifesaving skills.

This is the third year Rainbow Beach Surf Lifesaving Club has hosted the event, and they’ve invited Gympie locals Jarrod Dan and Lauren Langley to cater.

They smoke locally sourced meats low and slow for 12 hours over Ironbark timbers and serve with fresh, seasonal and sumptuous sides.

Ocean Roar is the dedicated IRB competition series which features five rounds of competition throughout the season with each round attracting on average, 280 competitors. The competition works on a cumulative point-based system with the winning team awarded the Premiership Title at the end of the series.

The event is a popular precursor to the Queensland IRB Championships which sees over 300 competitors go head-to-head in the pinnacle event of the season.

So come down and experience Round 4 IRB Premiership Series – you may even see a Rainbow Beach team!