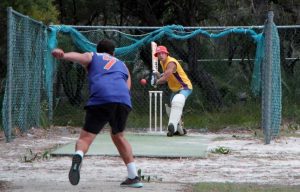 The Rainbow guys in action at training before the season begins

Spring is here which means one thing…

The season kicked off last month with the Rainbow guys playing their first game against Tin Can Bay. They have five games playing away then five 1-day games at home from October 29.

“We were supposed to play our first five games at home but because the council is doing some work on the oval we had to swap a few weeks around. Hopefully by the time we play on home turf the pitch will be ready and raring to go,” says Murray (Merv) O’Neill.

“The ground hasn’t really been properly looked after for a long time. This year the council will topsoil and fertilise the oval and they are going to plant out the surrounding area that we cleared during the off season.

“Next year they will move the ‘Hill’ back; make a new pitch, create a 400m running track and develop the area as an athletics field which will mainly be for the school’s benefit, but also for the community to use.”

The team as it stands at the moment has about 20 members, from as far afield as Caloundra and Gympie but, as is usual, they can’t all play and train every week.

Merv is keen to get not only more senior players involved but would love to organise a kids’ team. He has sent info on the T20 Milo Blast to the school so any kids keen on having a go can contact the school.

“We want this to be an ongoing thing so we really need to get young blood playing and coming up through the ranks. If anyone, young or old, is interested in playing come down to training and have a bat and a chat.”

Training is every Tuesday at 3pm, usually at the oval, but while the upgrade is happening it is being held at the nets behind the school.

Mark the 29th in your diaries…. the cricket season has begun!