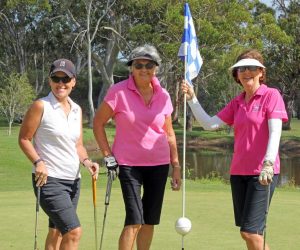 The Tin Can Bay Golf Club plans to run a “Chicks with Sticks” Program for women who want to learn golf or get back into it after a layoff.  Look out for flyers around town and contact Janet on 0428 725 857 for further information.

Congratulations to the Tin Can Bay Ladies’ Pennant Golf team. They won the Bronze Division against Sunshine Coast teams including Noosa, Mt Coolum, Maroochy River, Noosa Springs and Cooroy. This competition was held during March and April with the final match play games held at Tin Can Bay Golf Club.

Over Easter, the Club held a 36 hole Carnival event over two days.  The results were as follows: