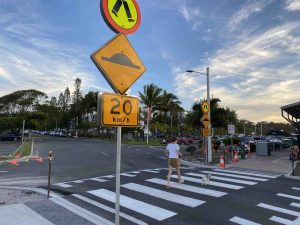 Works on Stage 2 of the Rainbow Beach Our Towns – Streetscape Revitalisation project are very near completion, as the finishing touches are being added to close out the project.

You may have seen the change in traffic signs at the end of the main street – there are no STOP signs at the Kirchner Avenue pedestrian crossing (between the shops and the headland).

Instead, GIVE WAY signs were installed at the T intersection on Rainbow Beach Road, near The Deck at Sea Salt.

Last month, the team were busy completing the new central crossing area, upgrading the Kirchner Avenue intersection and foreshore footpath, and widening the footpath at the Clarkson Drive corner.

The Rainbow Beach Our Towns – Streetscape Revitalisation project is an initiative of the Queensland Government under the Works for Queensland Program, with $1M secured to deliver improvements across the two stages of the project.