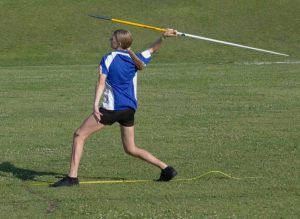 “Throws” is one element of Little Athletics with the trio of discus, shot put and javelin. All have different propulsion techniques similar to a fling, push and throw. Age groups are given allocated weights/sizes that are proportionate to development and ability. Basically; the older you get, the heavier it gets.

All throwing events can be traced back to Ancient Greece and are mainly inspired by hunting and war. The javelin is a classic example of a simulated spear and despite the long history of javelin, the apparatus has not changed much over time.

It is said that Ancient Greeks would throw stones as a kind of sport and there are records of soldiers throwing cannonballs in the Middle Ages however the modern version of shot put is traced to the Highland Games in Scotland in the 19th century that saw competitors throwing a rounded cube, stone or metal weight from behind a line.

Discus was one of the five events in the pentathlon from the ancient Olympic Games. The discus was made of stone, iron, bronze, or lead, and was shaped like a flying saucer. It was introduced as a standalone event in modern athletics when the Olympic Games were revived at Athens in 1896.

If you would like to see how far you can throw then head down to the Tin Can Bay School Oval Saturday afternoons at 2:30pm for a $5 trial. There’s still time to join up for the season. Email ccla2014@outlook.com or call Jess on 0411 218 254 for more information.