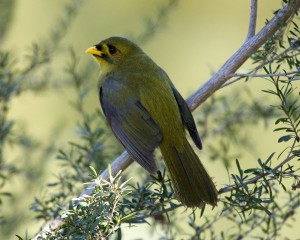 Bell miners are causing a huge problem in our forests

You may be familiar with the tinkling call of bell miners, or bellbirds, if you have been near colonies in moist forest areas. Declining forest health and the presence of large numbers of these nondescript birds are causing Bell Miner Associated Die-back (BMAD), a problem occurring in wet and dry eucalypt forests.

The condition has achieved national significance as it has caused loss of forest from Queensland to Victoria.

Some eucalypts are attacked by a sap-sucking insect or psyllid that feeds on their leaves. They produce a sugary substance (lerps) that the bell miners eat.

The natural predators of the psyllids, insect eating birds, are kept away by the aggressive, territorial bell miners; so the insect numbers increase and the damage to the trees from nutrient reduction and defoliation can become severe and eventually fatal.

This is a simplistic explanation of the issue, as other factors play a role. For example, weed invasion, often lantana, provides a dense understorey that is an ideal nesting environment for the bell miners, leading to an increase in the population. Drought, logging, fires and grazing are other factors implicated in dieback.

The health of the forest is threatened as flowering and fruiting diminish and seeds are not produced for forest regeneration. Animals that rely on flowers, leaves and fruit are also impacted.

This is a very serious problem and is being addressed in a number of ways. Removal of lantana to take away nesting sites and force the birds from the forest is one approach.

Breaking the symbiotic relationship between bell miners and psyllids is vital in saving the forests.