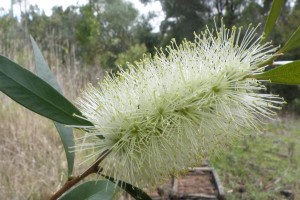 Plant of the month is Melaleuca saligna (formerly Callistemon salignus), a small tree to 9+ metres, with a dense habit and papery bark. It has cream flowers in spring and pink new foliage. (Photograph source: www.wetlandwalks.com.au)

City Farm is opposite the Community Centre on Tin Can Bay Road. The farm is open to the public for plant sales on Tuesday, Wednesday and Friday from 8 am to 3pm.

I was going to write an article on the Callistemon, as I have been admiring the brilliant flowers while travelling recently. However, there is a strong move now to merge the genus Callistemon with the genus Melaleuca, so it is hard to discuss one without the other. The argument for including them in the same genus is that the differences between them are insignificant.

Both belong to the myrtle family. Callistemons have typically been called bottlebrushes and Melaleuca varieties have been referred to as paperbarks or honey myrtles. Although their flowers are very similar, they differ in that the stamens in Callistemons are free, while in Melaleucas they are in bundles, though there are exceptions…

Although no final decision has been made about the merge, and scientific opinions differ, some states have acted, so if you are looking for a specific Callistemon, you may find it re-named and in the Melaleuca section. A bit of a nuisance until we get used to it, but there it is.

As garden plants, the myrtles have lovely flowers in a wide range of colours – red, green, pink, orange, mauve  – and nectar loved by honeyeaters and many insects. The colourful new foliage is another ornamental feature and they tolerate most soil types and require little maintenance.

As with many natives, lack of pruning can lead to straggly growth, so light pruning after flowering will promote a tidier shape. A native-specific fertiliser applied in early spring and autumn, and after pruning will be beneficial, and mulching is always recommended.