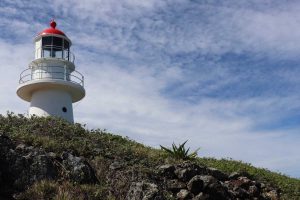 Our National Park was selected for the Queensland Government’s Ecotourism Trails program, which focuses on culturally and ecologically sustainable ecotourism opportunities with social and economic benefits to Traditional Owners and regions.

Feedback was sought in the Community News in July 2019 and in April 2020, it was announced CABN would deliver the service. Community consultation was conducted throughout June 2021 – with sessions at Cooloola Berries and Rainbow Beach Markets, a few days before comments were due to the Commonwealth Government for environmental impact assessment under the Environment Protection and Biodiversity Act 1999 (EPBC Act).

The evening at the Rainbow Beach Community Hall was more of a report on feedback provided, rather than an open forum.

However, state government takes submissions at any time, and after Commonwealth assessment, the project still requires state and local government approval. 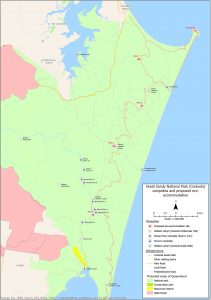 The current 102 km 5-night Cooloola Great Walk will not change – 1500 walkers each year pay $6.75 per night as a self sufficient camper.

Unlike the current walk, there is a set fee from the leaseholder and a percentage of revenue, and the funds are quarantined for the Great Sandy National Park.

The three-day walk (34 km) will begin at Bymien Day Use Area, and include a loop between, and overnights at Poona Lake and Double Island Point – finishing at the Rainbow Beach trailhead.

The three southern sites will have six safari tents at each. The two northern sites include 10 cabins, to accommodate trekkers on the three-day walk. Accommodation will include two beds per cabin, with linen, ensuites with timed showers, and eco-flush toilets.

The Department representative assured the audience that there was no means for expansion of services, leases that were sold or transferred must go through the whole process again. They also detailed the environmental and ecological and other surveys undergone for campsite selection.

Benefits discussed were increased tourist visitation and diversifying the nature-based opportunities in the region, providing a broader attraction so Cooloola Section is seen as ‘more than a 4WD park’. Being included with the other ecotourism trails would showcase our region as one of the ultimate destinations in the state. 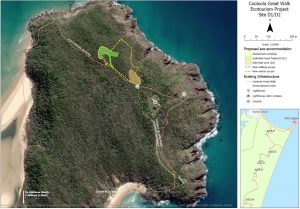 Some participants appreciated that instead of the proposal restricting access, it was opening up National Parks for more use, especially camping at Double Island Point and the opportunity of a shorter walk option. It was stated that the more the public had access to experiences like this, the more educated and appreciative people would be of preservation and our environment.

It was also seen as a breakthrough that revenue was returned to our National Park, and not the state coffers.

Kabi Kabi (pronounced ‘Carbee Carbee’) involvement has been integral to the whole process with aims to maximise benefits including employment, training, business opportunities and promotion of their unique cultural heritage. Their representative is positive about the potential of the project, in engaging Kabi Kabi People to deliver an authentic experience on the walk, sharing stories and culture.

Many concerns were voiced at the meetings, including:

CABN will still need a final approval from the Queensland Government under the Nature Conservation Act 1992 (Qld) and local councils.

You can write a submission to the Queensland Government about the project at any stage, to Ecofacilities@des.qld.gov.au.