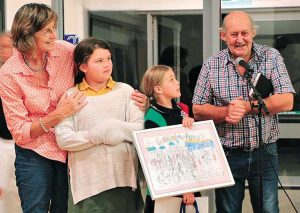 Enter Tony Stewart who decided that he was going to bring the kids down here to get away for a week and have some fun. With help from a collection of businesses, community groups and individuals from our region, it was made a reality.

And what a week they had, from visiting Australia Zoo and UnderWater World, to taking in the natural beauty of our coastline, and they enjoyed every minute!

I caught up with them at the end of their stay at a barbecue held in their honour at the Community Centre. They were some of the nicest, friendliest, well-mannered kids that I have ever had the privilege of meeting.

“The support from the community and businesses has been amazing, everyone I have approached has put their hand in their pockets and helped us out,” said Tony.

“I first mentioned my idea to Dr Curley. A few days later he rang me up and donated $1000 and it just went from there. It’s incredible how generous people have been.”

The kids were accompanied by their Principals, Jo Wernecke from ‘Ilfra’ and Tanya Bambling from ‘Mutta’.

They were both very grateful for the fantastic experience given to the kids and to themselves, and Tony said a few tears were shed after hugs all round on their departure. 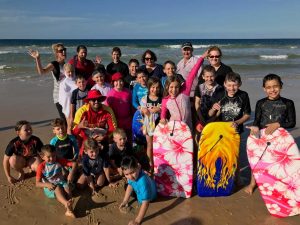 As Jo said, “It was a week of firsts for most of them …. first train ride, first time seeing the ocean, first time visiting a zoo and first time away from their parents. It has been a huge week and the kids are very tired, but they have made memories that will last forever.”

“We were so excited about this trip,” added Tanya. “We have all had a wonderful time. We are very lucky to have been given this opportunity. We are lucky little bushpigs,” she said laughing.

They both wanted to thank everyone involved, but especially Tony and Rosie for all their hard work, and Col McPaul the bus driver for his patience.

The kids showed their gratitude by performing an original song with great gusto and by presenting Tony and Rosie with a beautiful picture of all the kids, lovingly drawn and coloured by Gypsy from Muttaburra and Susan from Ilfracombe.

What was the best part of their holiday?

Australia Zoo won hands down with the kids, all of them calling out their favourite animal.

Harry voted for the red pandas while Abbey’s fave was the giraffes and the delightful Delilah couldn’t resist the kangaroo and her joey, “I couldn’t help myself. I just fell in love with them,” she giggled.

They still had a breakfast with the dolphins at Barnacles, and pancakes and strawberries at Cooloola Berries on their last day!

As Liam the lifeguard said to me, “What a special bunch of kids, they are just incredible.”

Yes, Liam, I have to agree that they were, and I think they managed to touch the hearts of everyone who had the pleasure of meeting them.

Tony says the drought is worse than ever.. his 15th load ready to go October 2.